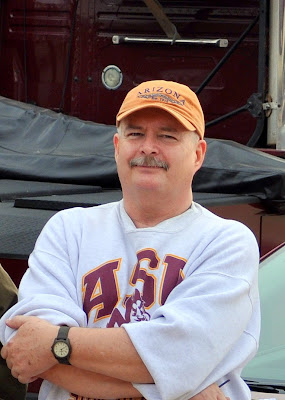 "Children are a blessing from the Lord.” Psalms 127:3
Michael, age 55, died peacefully in his sleep May 10, 2010. Born April 15, 1955 in Ogallala, Nebraska, Michael was the oldest of three sons born to Mike McFall and Jean (Johnson) Krull. Michael attended Lincoln East High School, University of Nebraska, University of Utah, and graduated from the University of Hawaii. His love for America was evident by his service and retirement from the U.S. Army. He always commented that one of his greatest accomplishments was finding and accompanying the remains of American soldiers who had lost their lives during the Vietnam War and were left behind.
Those left to cherish his memories: wife, Karen F. McFall; two sons, Michael Romeo McFall and Stephen Charles McFall; father and stepmom, Mike and Pat McFall; mother, Jean Krull; brother, Patrick McFall and wife Michelle; sister-in-law, Ann McFall , nephew and niece Patrick McFall and Shala McFall, uncle and aunt, Larry and Judie Johnson; cousins and good friends. He was preceded in death by his brother, Scott A “Scooter” McFall; step-father, Chuck Krull; grandparents, Fred and Esther McFall, Martin and Lucille Johnson.
A Memorial service was held at 1:00 p.m. Monday, May 17, 2010 at Bring Funeral Home, 6910 East Broadway, Tucson, Arizona. Internment will be held at a later date as Michael’s request was to be laid to rest at the National Memorial Cemetery of the Pacific located in the Punchbowl crater in Honolulu Hawaii where he spent many years during his career in the United States Army.
*********

The above is Mikel's obituary. The picture was taken just a few weeks ago on March 31st when he came to North Ranch to visit. He had his oldest son Michael (age 15) with him and we all went out for dinner. It was a great evening and we had a wonderful time.
Yesterday, our "kids", Rollie and Gina had to leave us and head back to Louisiana.  Their son-in-law Shane is graduating from the University of Louisiana on Friday and they wanted to be there to celebrate his achievements. Congratulations Shane!  We were sad to see them go but we know we'll see them again real soon.  They will be coming to Custer in a few weeks.  Thank you Rollie and Gina for your love and support.  You are truly a blessing from God.
We arrived back home at North Ranch yesterday afternoon.  We plan on leaving here in a week or so and travel back to our home in Custer to start the healing process again.  We will be pretty busy for the next week or so getting the house closed up and the Teton loaded and ready for travel.  That's good though, we won't have much time to think. Its hard for me to concentrate right now.  Please continue to keep us in your prayers.
God Bless you all and Thank You each and every one for your wonderful support.
Mike
This Blog is Published every Wednesday and Sunday..
Posted by Mike McFall at 6:03 AM

Mike and Pat, it was our honor to be with you at the memorial service, more or less representing the RV Blogger community. We were very impressed with the military honors for Mikel.

Mike & Pat my heart & prayers are with you at this time... May the good memories & your faith carry you through.
Love & HUGS
Donna

Mike & Pat you have been in our thoughts and prayers since we heard of Michaels passing. There are no words to offer that will help in the pain you feel, W hope that you can heal and get back to enjoying each other in God' s great land.Gond Bless and watch over you. Sam & Donna.

I can't think of a more beautiful resting place for Mikel than "The Punchbowl" in Hawaii. I've visited there several times to pay my respects to the fallen soldiers. Although his time came much too soon, he will rest in peace with his fellow "comrades in arms". Again, so sorry for your loss. Take care and we'll be thinking of you as you make your way back to the Black Hills.

Our prayers are still with you and your family. Words can seem so inadequate at times like these, but sometimes that is the best we can all offer. I hope you continue to feel the Lord's comforting arms around you as you try to heal.

What a beautiful blog.

Love and hugs to you both!

Many hugs and prayers to you both and a successful journey back to Custer. We are at our summer workamping destination in a beautiful deep green canyon just outside of Ouray, CO. We prayed for a real truck yesterday navigating 11,312' Monarch Pass, thanks for inspiring us throughout the years!