We can't have a Rally without RAIN!!!

When I wrote last Sunday's blog, it was early and before daylight.   I think I mentioned that it was sprinkling lightly. We departed out quite little spot in the desert about 7:30am. By that time it was more than sprinkling, it was raining! Normally on such days, I would just STAY PUT. However, this was the day before the big Gypsy Journal Rally in Yuma and we had to get our booth set up and be ready for business Monday morning. So we continued on and it wasn't long until the bottom fell out and it was pouring!  Just as we arrived at the Fairgrounds in Yuma, it cleared up somewhat. However, the place was a LAKE. Dozens of other RVs were parked everywhere waiting in line to get parked.

Pat had called Nick Russell, the Owner/Editor of the Gypsy Journal,who is putting on this Rally, and advised him we were arriving.  One of the parking crew showed us where to standby.  He called Nick on his Radio and in just a few minutes, Nick showed up in his golf cart and told me to climb in. Nick took me in and showed me 2-3 places he had in mind for me to park our big rig and told me "the choice is yours". WOW, what service!!  It pays to know the Head Man!!! 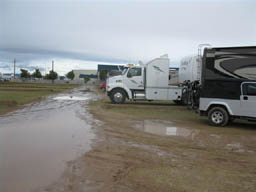 After I picked which spot would best suit our needs, Nick brought me back to our rig and told me to drive on in. This is the condition of the roads and area where everyone was parked waiting to get in, it was a mess. I plowed  through all this water and muck, around everyone and on into the Fairgrounds and we got settled in. We have a great spot.

In a couple hours, the bottom fell out again. There was rain, hail, lightning and the wind blew. We were in the process of setting up our Vendor Booth when Ms Terry, Nicks better half, came and told us that the parking crew was badly in need of help. Ms Pat and I immediately dropped everything and jumped in the Honda and headed for the entrance. There we ran into Nick and told him we were there to assist in any way we could. He gave us some quick instructions and we took the little CRV and led several big rigs into the area and found them a spot.  I managed to get totally soaked to the BONE!!!  But things soon settled down and everyone got taken care of.  I got home and got some dry clothes on.  I was freezing to death. 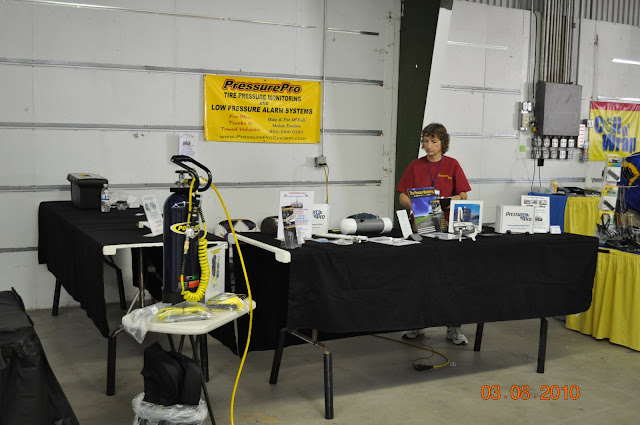 Here is Ms Pat setting up our booth. We have done this so many times we could do it in our sleep. No getting around it, it is hard work. Soon the crowd will be here. 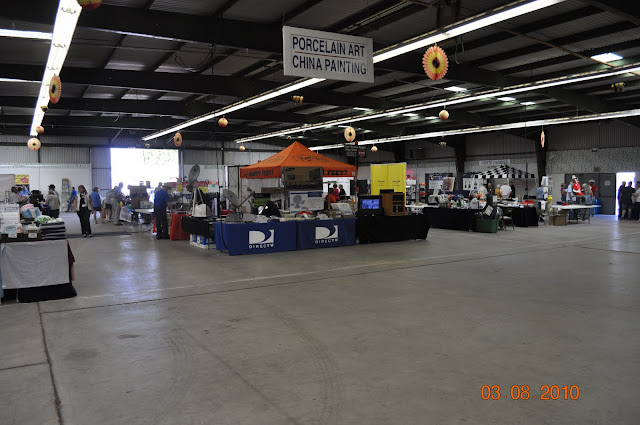 This is the other Vendors getting set up. There is a lot of Comradery between the vendors and we have a ball.  Some we have met many times before and others for the first time.  That's half the fun and one of the reasons we keep coming back again and again. 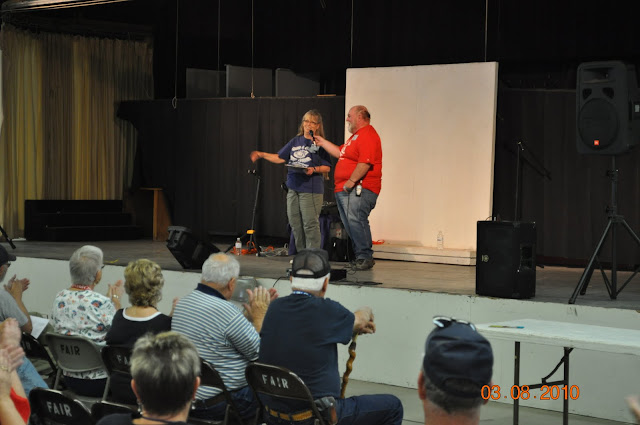 This is Nick and Ms Terry welcoming everyone to their 4TH annual Western Rally during the opening ceremonies. We have attended all 4 Rallies. 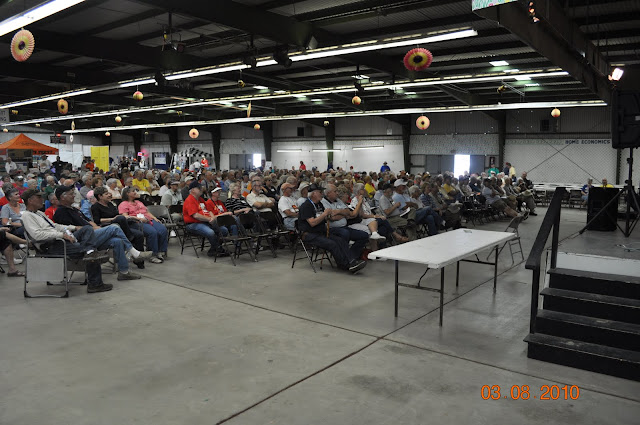 There is a big crowd and we look forward to a Super Rally, as these two and all their helpers really know how to do it and make it one of the best rallies we have ever had the privilege to attend.

This morning we are on day 3.....halfway through the Rally.

Thanks for stopping by......A big welcome to new followers; Judy and Emma, Mac and Netters, Allan and Jeanne Webster and Kenny and Angela. That brings our total up to 63 now.  Wow!  For the longest time I was trying to get up to 50. Keep 'em coming!!! We had 230 hits on last Sundays Blog.  We appreciate you all very much..

This Blog is Published every Wednesday and Sunday..

Hey Mike & Pat... I sure hope you guys have a great week... Sounds like other then the rainy start all is going great! Have fun. sell a lot and travel safe!
Donna

Sure wish we could be there, but we're glad we missed "Gypsy Lake!" What a great looking place for the best ever western rally!

The rain and wind is really starting to get everyone down a bit it seems. Still looks like you've got a pretty good crowd there for the rally though. Hope the weather picks up a bit for the rest of the week.

Wow, we can't believe that it is half over already! We remember L.O.W. Tucson 2007 very well and this sure reminds me of it! We are with you guys in spirit. We are workamping in W. CO this summer and coming up to Rapid City in the fall to change our residency. I just changed our Chevy 3500HD dually over to metal stems in preparation of a pressure pro in a few weeks. Best, Dave & Sheila