We are HOME in the HILL’s!! 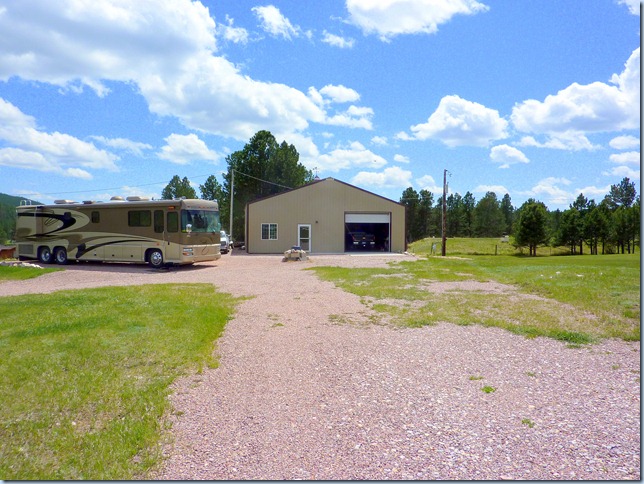 Here we just arrived at our place on the Hill. I am getting the Motorhome parked. We were only 30 miles away when we stopped for the night, so it was a nice easy trip on in Sunday morning. We arrived about 9:30 and what a beautiful day it was.  The place had wintered well and the rest of the day was spent getting everything ready for us to move in. By evening, we were all set to spend the night in our "Cabin".

The trip went about one day faster than we had planned but it was a good trip.  Remember we were taking a new route.  I am glad we did as we saw some neat new country but I wouldn’t do it again.  It was not as easy a trip as our normal way. The trip from I-70 north up Hwy 139 on the west edge of Colorado was the worst.  It is a narrow and very rough road. We had to cross Douglas Pass which was under construction and had many, many hairpin switchbacks.  They were laying new asphalt, so it was one way traffic over the pass which was 8000+ in altitude.

The evening at the Elks Club in Vernal, UT was enjoyable. They welcomed us and provided a nice paved place to spend the night and even gave us a free drink.  20 amp electric was available but we didn’t need it. We discussed the road north out of Vernal through the Flaming Gorge area with locals and they advised us that it had many steep 8% grades up and down, plus a lot of hairpins.  About that time I was thinking of turning around and backtracking for about 50 miles and go to Craig, CO. and then north on Hwy 13 which was the old way that I was very familiar with. But then they told us that the road was good and compared to our trip yesterday over Douglas Pass, it would be a piece of cake, so we decided to stick with our plan. 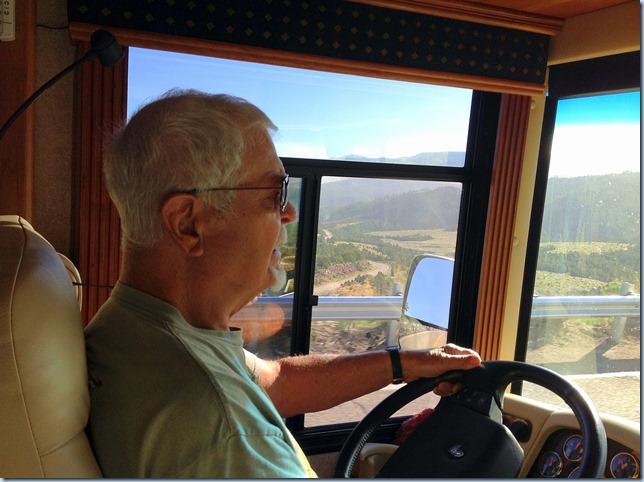 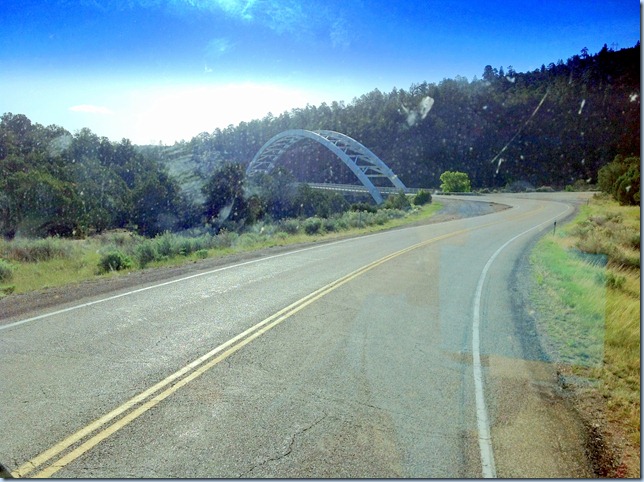 Ms. Pat took this picture of me driving just as we approached the Flaming Gorge Reservoir bridge. You can see out the window that it was beautiful. 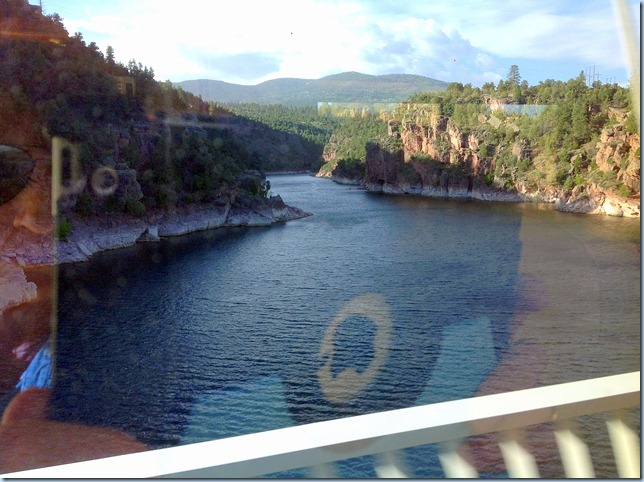 This was the view from the bridge.  Ms. Pat took these pictures with her new iPad3. The guys back in Vernal were right.  This trip was a “piece of cake” compared to yesterday on Douglas Pass. Soon we were back on flat land as we crossed over into Wyoming.  We stopped at Flying J in Rock Springs, WY and then proceeded on North through our great friends Fuzz and Frieda’s old stomping grounds around Hudson, WY. The wind came up and it was a tail wind, so I didn’t even throw out the anchor to stop. It was easy going and I just let her float on down the road. 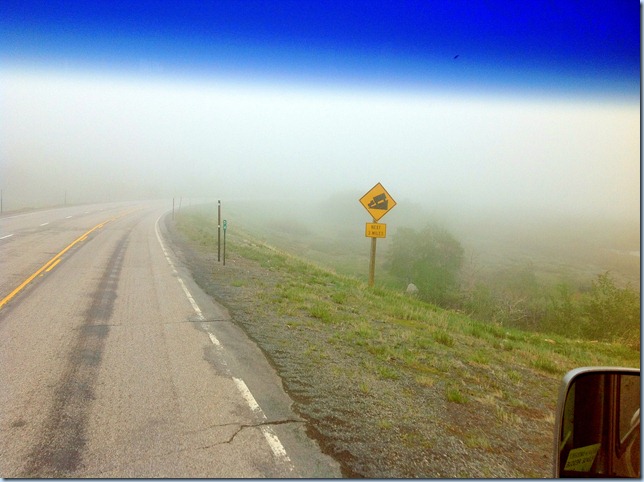 About noon, while topping South Pass with an elevation of about 7500’, we ran into a little fog. We stopped and had a bite of lunch and as soon as we started down, the fog cleared and we were rolling freely again.  By the time we reached Riverton, WY the wind had switched to be out of the West, perfect as it blew us right on into Casper. We were going to stop at Riverton for the night but it was only 1:30 pm and it is real hard to stop when the wind is making it so easy.

All I had to do was sit there and steer, not even press on the accelerator.  I would glance down at the on-board mileage computer and it was saying 9-10-11-12 MPG, way up to 20-30 once in a while. It doesn’t happen often and as anxious as we were to get home we just kept on rolling.  We were getting storm warnings on the Droid from the local weather bureau around Casper telling us there was a bad storm front moving in and the next day was not going to be good.   I know what kind of weather can suddenly appear in the Casper area from all the days we spent at the Teton Factory there.  We kept on rolling and by sundown we were only 30 miles from home...from there you know the rest of the story from last Sunday's Blog.

We are happy to be HOME...let the fun begin. We went in yesterday and got the building permit for the “lean to” we plan on building. This morning the surveyors showed up just as I was about to wrap up the Blog. That detained me, sorry for the delay…

Thanks for stopping by, come on back Sunday and I’ll bring you up to date…..

This Blog is Published every Wednesday and Sunday..
Posted by Mike McFall at 9:27 AM

Glad to see you are safely home in South Dakota.Looks like the drive was pretty and an old trooper like you can't handle anything comes along.
I am home to and replaced the window we lost on the Florida trip yesterday, now I am ready for another trip with the bride, Maybe next month. Be safe out there. Sam & Donna..

Glad that you made it to your northern home safe and sound. Looking forward to your posts from the north for the summer!

Glad you made it home safe and sound. Always a nice feeling to have the drive behind you. Enjoy!

So glad you made it safely back to the "cabin." Enjoy your week home.

Always so great to have those helping tail winds for sure. That mountain driving can put a little sweat on a feller's brow alright but it keep's him sharp. Good job on the driving & good job on the pictures. Always nice to be home:))

Welcome Home!! So glad you all had a safe trip and found all things in good order!
Looking forward to your adventures in the Black Hills this summer!!

Howdy Mike & Ms Pat,
20-30 mpg? That's downhill with a tailwind!!! Too bad you weren't a day or so earlier in Vernal, UT;my friend Bob Skelding aka The wagonteamster.com, just made that same trip with horses and wagon..(his story/blog is a good one) Sure are glad you got home and out of the heat.Y'all and the Dixons too,also!! Sometime we also have 110* and it's a dry heat too. It doesn't last over a week, tho!!
butterbean carpenter

We are here in SD too. On the opposite side of the state in Mitchell. We need to get our voters registration card and change of address on Len's drivers license. From here we head to ND and then head west and back to your side of the state where we will be for over a month in the Rapid City area.

What a lovely time of year to be in SD.

OK I'm jealous ~ LOL LOL That you live in my favorite area... be there again next summer! Glad you arrived safely ☺
Have fun
Donna