Just in the nick of time!

WOW!!  That was almost too close for comfort. Wednesday evening the building was completed and Thursday was the big day to see if the Motorhome would fit under it. The slope down into it is what has us all worried. (especially me!) Everyone kept telling me “You're going to have to slope the ground in front a little more to keep the air conditioners and the TV dome from hitting." I really didn’t want to dig anymore unless I had to.

So Thursday was the day to find out.  I’ll tell you I didn’t sleep too well thinking about it.   So Thursday morning, we slowly got the Motorhome ready to move. I had a big lump in my throat as I pulled that big old gal over and began slowly backing down towards the opening. Finally, the time has come. Will it or won’t it??? 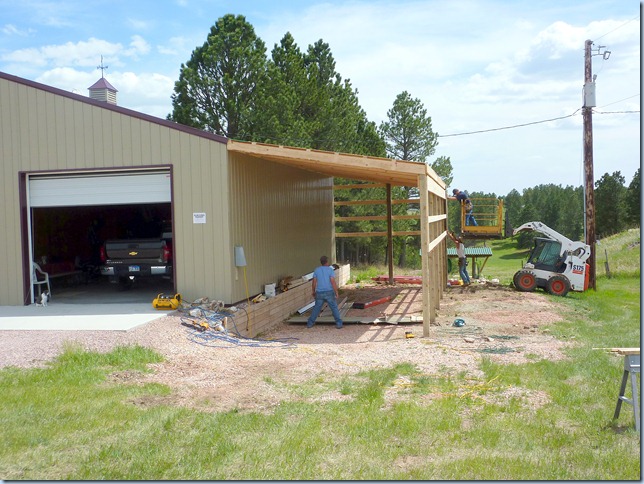 This is the slope I was referring to.  That’s what had us all puzzled.  Although the opening looks small in this picture, the tape measure says it will go under.  But the slope, that’s the question. Even the builders couldn’t say for sure. We wanted them to just raise the outside end of the roof a few more inches but they wouldn’t do it.  They said they had given us the minimal amount of slope allowed due to the weight per foot of possible snow, etc. That is absolutely the highest they would put it.  It should fit but the slope....well, that was a different story. 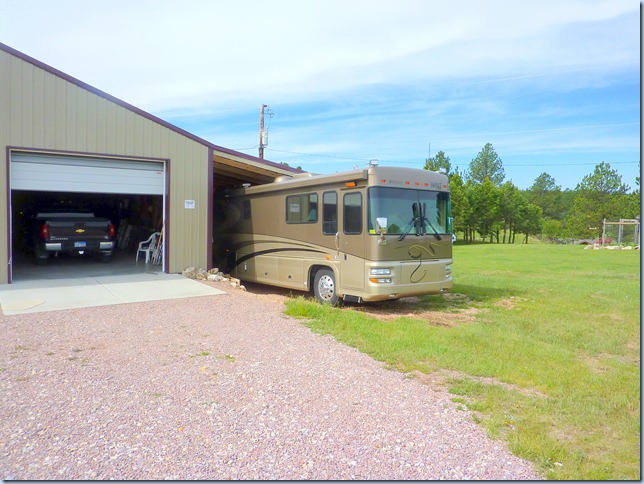 Slowly I backed down into the opening…….slooowly, ever so slow, as I watched and listened for Ms. Pat.  Hey, so far so good. :-) I had to stop and get out and take a look. Is it actually going to go? 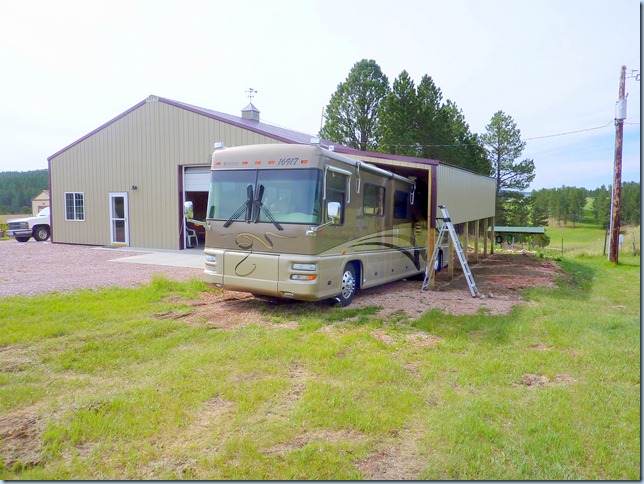 Ms. Pat was perched on this ladder closely watching as I inched back into the shelter. I was watching her as I watched both sides and listened for her to scream and hopefully not hear any “crunches”! 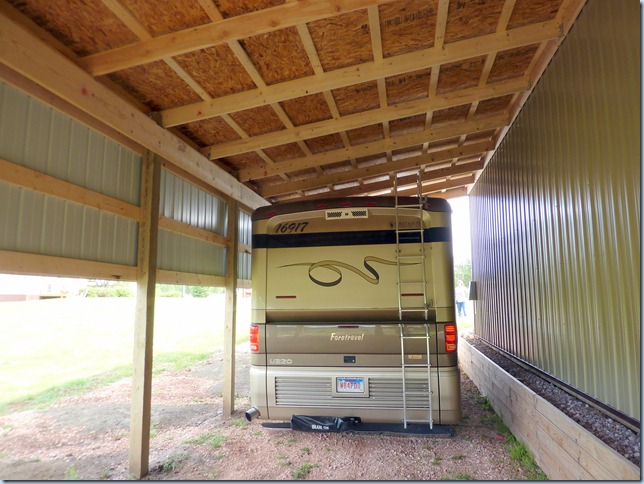 It looked OK from the rear…. 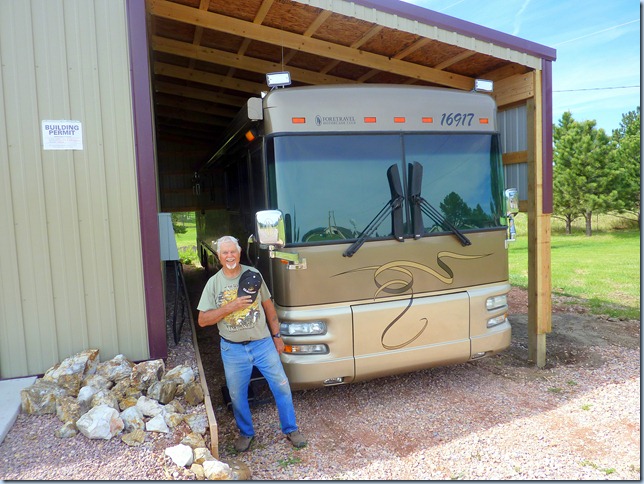 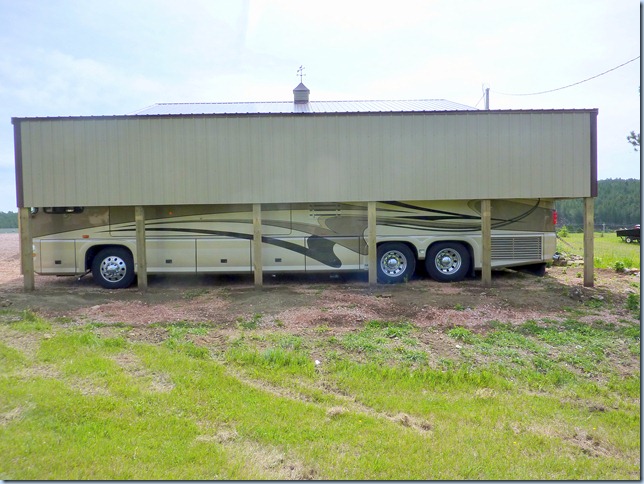 As you can see it took every inch of the space, as the building is 40’ long and the Motorhome is 40’ long.  We can get the bedroom slide out fine but not the long living room slide...which is fine as the coach is very livable with the living room slide in. The steps and the front door open in good shape as well as most all the side doors. All is well and we are happy. Gosh I lost all that sleep worrying about it for nothing!! 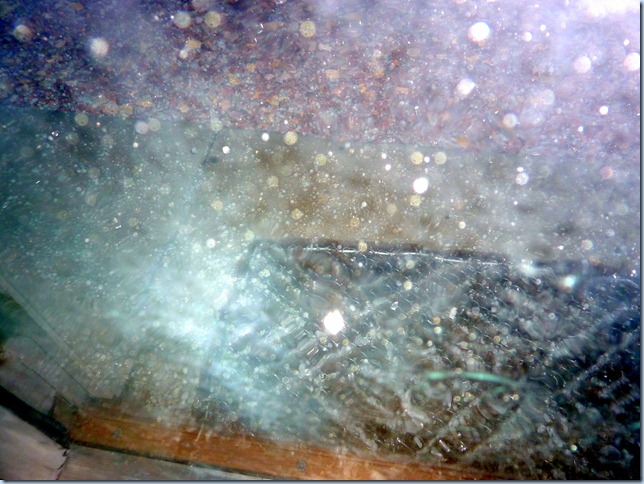 Just in the nick of time!!  A few hours later that afternoon, the sky darkened, the wind and rain began and shortly this was the view out our storm door. It was HAILING!!  For the first time in our lives, Ms. Pat and I just hugged each other in appreciation of knowing that our RV was protected.  What a great feeling as we thought of the many, many times that storms such as this had brought us to our knees.  We were ever so thankful!! 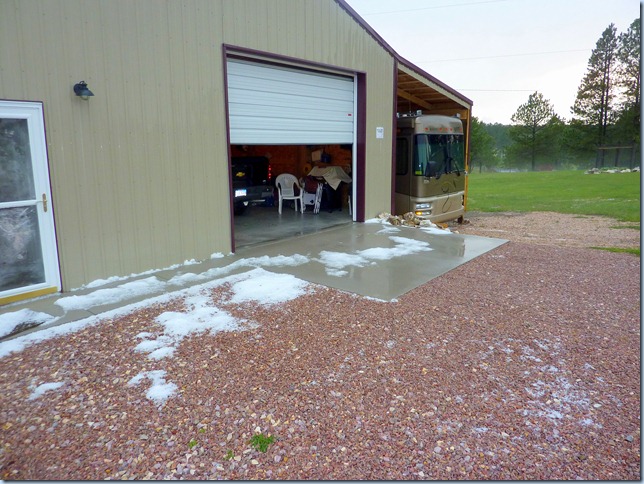 We received about an inch of hard, wind driven rain and a lot of hail.  I don’t believe any of the hail was big or hard enough to do much, if any damage. But a short distance from us, it was pool ball size, very hard and very damaging…breaking out windshields, windows and destroying roofs. The snow plows had to be utilized on the highways to remove the drifts of hail.

Then, last night just about bed time, another storm blew in.  We were lying in bed and heard a few "thunks" on the tin roof.  Nothing to worry about.....everything's under cover......zzzzzzzzz.

We again thank our heavenly Father for all he continues to bless us with.

We are so excited that our good friends Greg and Bonnie will be here to visit today. They departed their new home in Portland, TN Friday morning and headed this way. It will be so good to see them... it has been way too long.

Thanks for stopping by………. God Bless and Hurry back!

This Blog is Published every Sunday and Wednesday..
Posted by Mike McFall at 7:34 AM

Egads...I was a nervous wreck just reading and looking at the photos. What a super idea for Ms. Pat to stand on a ladder. Great driving and super job of watching!
The colors all look so nice. Everything looks like part of the landscape. Great job!

Boy Mike you figured it close, looks like it paid off though with the storm you got. Everything fine here at the ranch. just missed a day on my blog. Be safe out there. Sam & Donna.

That's almost too close in my book. But so glad to see you did get it under cover and just in time. Sure wish these storms would go away.

a little too close for comfort!..good job on the backing up!!!..quite the snug fit!!

Wow...fits like a fine glove, great job. I was showing Tracy and she said Mike must be a great driver just like you to get it into that space. So we both got a nice compliment!

Wow! A perfect fit...I would have been quite nervous of the fit with the units on top of your rig. Glad it did fit and in just the nick of time.
How blessed to be where you are and the joys of your homes.

That's very close. Isn't it great to have things come together. Thank God for the little things in life that work out. He's leading.

Looks good sitting under there.Even the colors match. Glad you missed the hail.

Howdy Pat & Mike,
GREAT JOB all around!! Worrying don't do nothin', but get your belly upset!!! Thank God you put it in the shed before the frozen participation began; at least it wasn't one of those S Dakota 6" hailstone storms..
Now, y'all can sit-down, relax and go 'Whew'!!

Thought you were going to end up telling us you had to grease the sides of rig to make it fit. Hail is a real threat & I always worry about our flat solar panels on the roof beeing smashed. Kelly once had to get a whole car repaired & repainted because of hail stone damage. My Virago Motorcycle was sitting right beside the car & only had a small hole punched in the seat.

Wow... what a story! So glad it turned out good, and the timing was so perfect.

I can just see me and Charley trying to back that big rig into that small a space. I would be yelling the entire time that it wasn't going to fit. Charley, on the other hand, would be calm but would later tell me that his heart was beating rapidly and that he was worried too. :)

Great job and even better timing!!

wow that was definitely just in the nick of time without an inch to spare...betcha you were holding your breath...good job!!

Nice to hear the Motorhome fit and missed the hail storm. Glad things are coming together well for you both with your summer home.

I recently came across your blog and have been reading along. I thought I would leave my first comment. I don’t know what to say except that I have enjoyed reading. Nice blog.