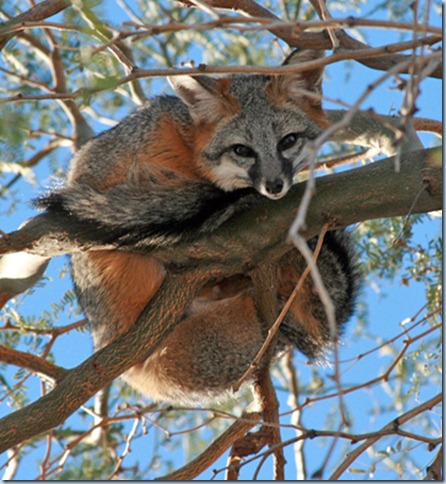 One of our neighbors had this fellow up in their tree the other morning.  Not someone’s pet pup for sure. He doesn’t look very comfortable up there…..but he sure is a pretty guy! 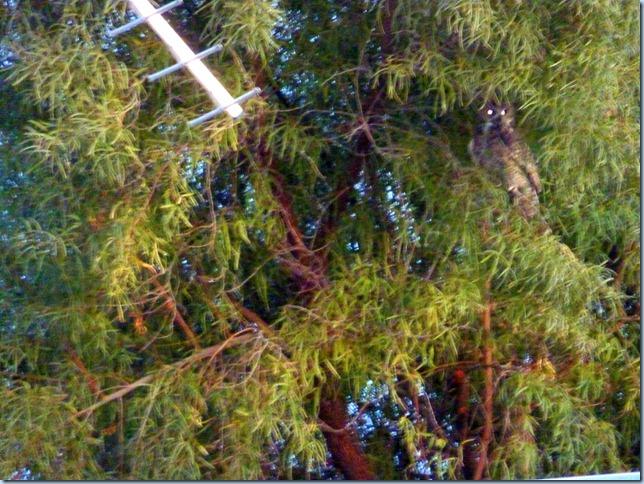 I stepped out early the other morning and saw this big fellow staring back down at me. It was so dark I could hardly see him, but the camera brought him out pretty good. 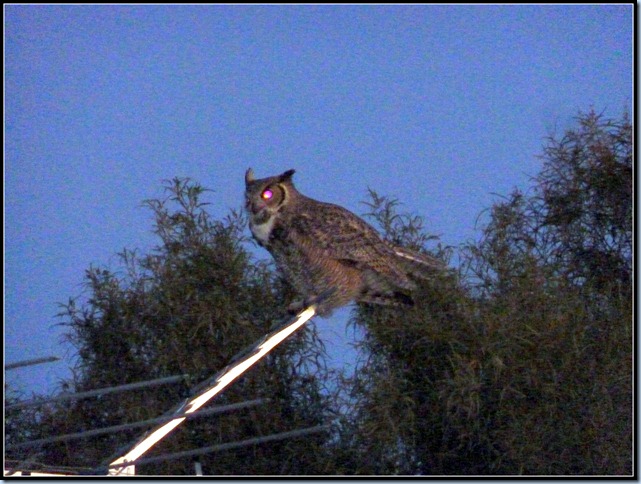 His buddy was close by perched on the TV antenna. These guys are BIG! Here again it was so dark I could hardly see him in the camera but when I lighten the picture up a little, you can see him well. 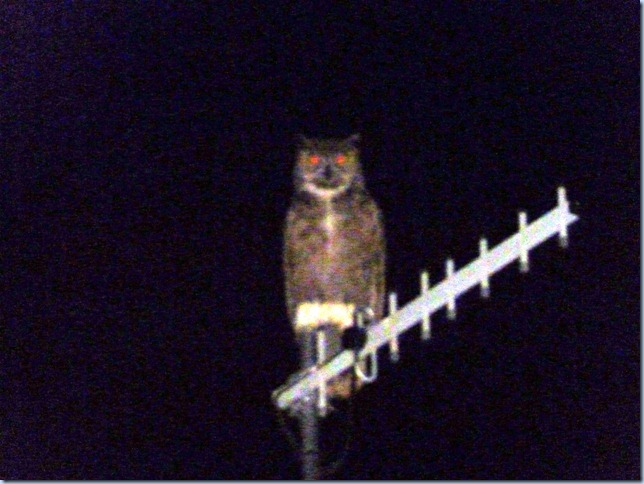 A few days later, when I stepped outside early in the morning before daylight, they were both perched side by side on my cell phone antenna. They were both just “hootin” away at each other.  I slipped in and snuck back out in hopes to get a picture of them sitting there together like that but no such luck. One of them took off but this one stayed and was giving me quite a scary look. 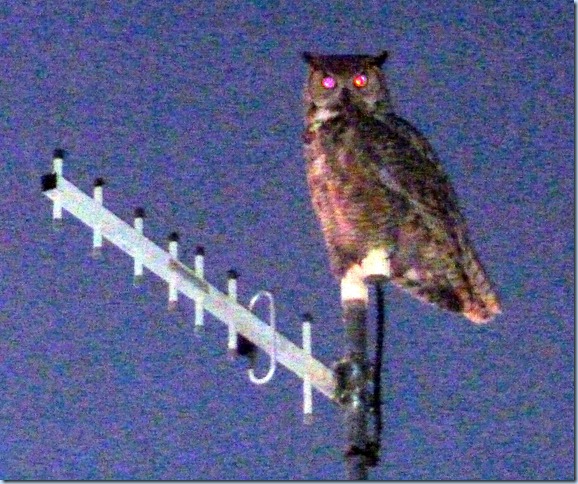 This one is not camera shy.  Although it was really dark and I have lightened the photo up considerably, he sat right there and watched my every move.  They are well over a foot tall….and their “HOOT” is loud! 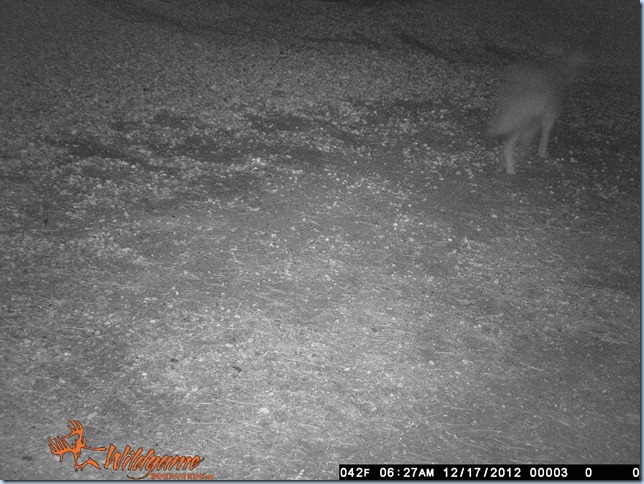 My wildgame camera doesn’t seem to be getting much wildlife anymore.  I don’t know what is the matter with it.  It sure doesn’t seem to be working right. Here is what looks like the south end of Mr. Coyote as he is going north.  It takes lots and lots of pictures of just the bare ground.   It's warranted for a year and I’ve had it for over that, so maybe that’s the life of it.

We went out to the Wickenburg Sportsmen's Club Saturday Tactical shoot yesterday.  It was 32* when we left North Ranch at 8:00am. I thought to myself, we are going to be the only ones foolish enough to come out in this cold weather and try to hit a target as we are shivering!  As I was going through Wickenburg, I noticed the thermometer on my truck said “23”!   Yikes, it was really cold at the Range but it soon warmed up and low and behold 27 other shooters showed up.  We had a great match!  Some fun shooting and really good practice for tactical shooting.

We were back home shortly after lunch time and Ms. Pat was busy as a bee working on her quilt and I was of course, cleaning guns!!  Seems about all I do is clean our guns.  I clean our guns every time we shoot them, which in most instances is at least 3 times a week. That’s 6 guns a week I need to clean.  The rest of my time I’m loading bullets because we go through an average of 600 bullets a week. That’s a lot of bullets and a lot of cleaning and loading.

But, as my friend JRoger says, "When a man is cleaning his guns, he is “bonding” with his guns!" So I am bonding and getting mighty close to my guns but I really enjoy working with them.  I can’t think of a better way to spend these cool, wintery days, than out in my shop working on guns and loading bullets.  I have a dremel polisher and I polish the barrels and the feed ramps while I am cleaning them up "spick and span".  I have my Sirius/XM radio on,  listening to Willie Nelson’s Roadhouse channel #56, with all the neat country western  artists serenading me as I “bond” with my guns. :-)  Here's a few of my favorites:  Johnny Cash, Mel Tillis, Kris Kristofferson, Merle Haggard, Waylon Jennings, Roger Miller and dozens of others.   Blows my blues away……and time flies by.

Life is good! Praise the Lord!!

Thanks for stopping by and may God take a liken to ya!! 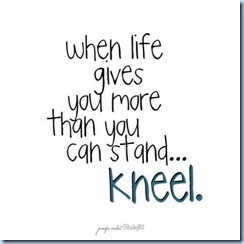 This Blog is Published every Sunday and Wednesday..
Posted by Mike McFall at 8:06 AM

great photos of your 'neighbours'!!

Some nice wildlife pics for sure. Nice to have a hobby that you and Ms. Pat enjoy doing!

Looks like you got yourself a few Great Horned Owls over there in your neck of the woods. Your back yard cam probably isn't seeing any critters because the Owls are swooping down & scooping them up........Be very careful about letting Ms Megabyte 2 out with those large Owls around.

Megabyte 2 better stay indoors with those huge owls out there!

You're going to have to mechanize that bullet reloading machine...600 reloads a week! You're a small business....LOL

Have fun and watch Megabyte 2!!!

Megabyte 2 better stay indoors with those huge owls out there!

You're going to have to mechanize that bullet reloading machine...600 reloads a week! You're a small business....LOL

Have fun and watch Megabyte 2!!!

The other morning here in Quartzsite there were two owls "talking" to one another. It was neat to listen to.