Rain, Rain, Rain and I Was "Kidnapped"! 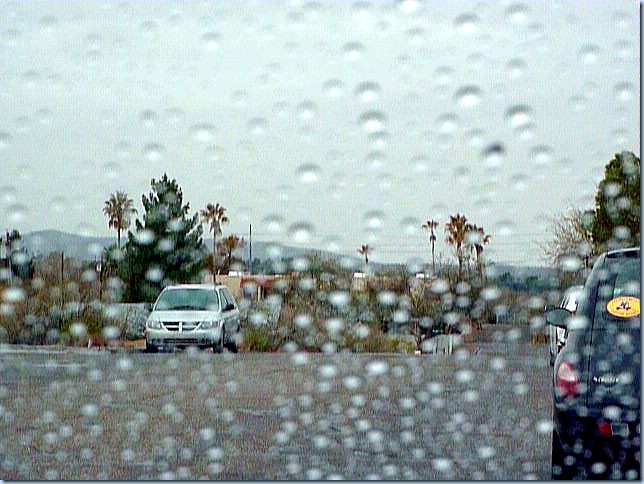 Thursday morning it was cloudy and they forecast rain in the afternoon. So at 8:30am we were at the Wickenburg Pistol Range ready to compete in the scheduled shooting match. Shortly after we arrived, it started raining…….. Whoa,  the weather forecasters missed it and the rain was early.  Everybody said, "Whoopee!! A Day Off!!!"  We all ran to our vehicles and took off, couldn’t shoot. You can shoot in freezing weather and when the wind is blowing but you can’t shoot in the RAIN.

Don’t see much rain here in Arizona at all, so it is a real treat.  This place always needs moisture, so it kinda puts everybody in a good mood.  I always said that when it is raining here, it is the only time I can sit in the house and do nothing without feeling guilty, like I should be out doing something.  I was heading home to do just that when Ms. Pat reminded me we had an appointment at the hospital!   I said, "What for?" She said, "You'll see". 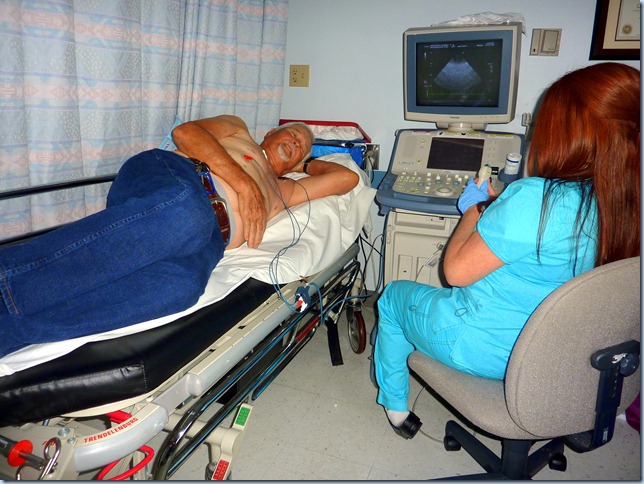 As soon as I got in the door, WHAM!!, they tackled me and removed half my clothes, slammed me flat on my back and rolled me into a room.  Then this young lady began attaching all kinds of wires to me. It's tough to put up any resistance to a young, red headed lady like this, so I surrendered rather quickly. I kidded with her and asked her not to hurt me.  I told her that Ms. Pat would have to come along because she was my bodyguard! 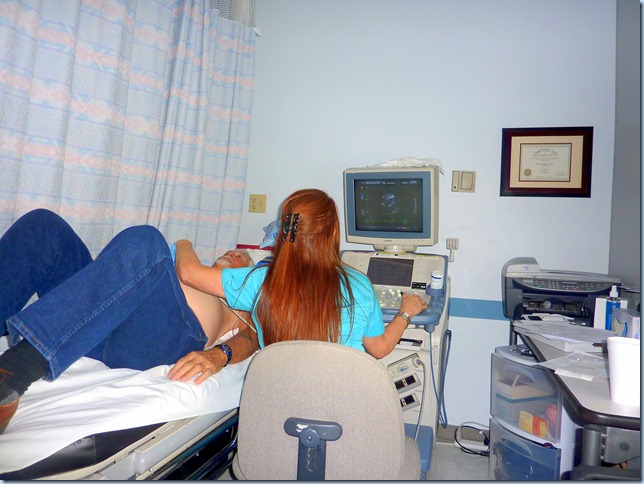 Suddenly she started doing all kinds of fun things to me and I could hear my heart beating on the machine she was looking into. I didn’t realize it "squeaked" like that....sounded as if it needed some oil to me! I told her that if she hurt me, I was going to HOLLER and Ms. Pat would shoot her! 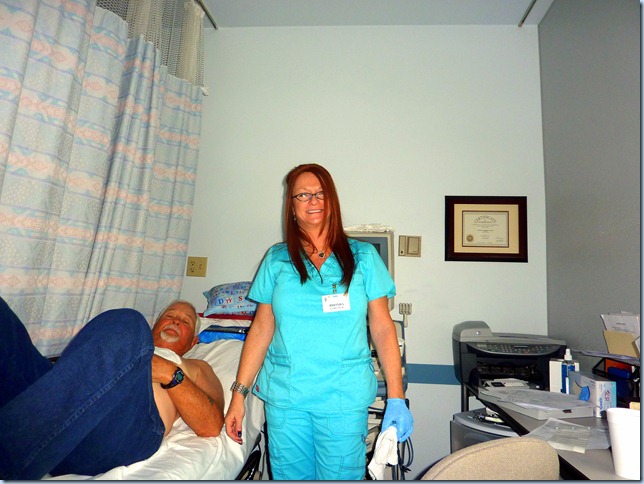 I was just lying back enjoying myself, having a good ole' time, when she took the wires off and turned to Ms. Pat and said “There, I’m all done with him”.  I think she was pleasantly surprised when Ms Pat asked her if she would pose for a picture.  She told us she had never been asked to have her picture taken during a procedure before!  Ms. Pat told her she would be a star on the internet.  She was a neat lady and she didn’t hurt me one bit!! 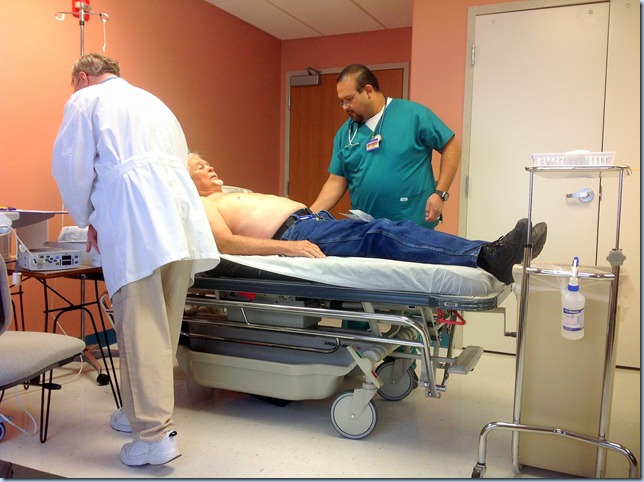 I no more than got my clothes back on and was in the hallway telling Ms Pat “Let's get out of here”!  when suddenly these two hoodlums slipped up behind me and abducted me! I was really scared this time. I remember my dad telling me when I was a boy, to always watch out if somebody in a white coat came to get you. Soon they had me flat on my back  and started removing my clothes.  AGAIN!! 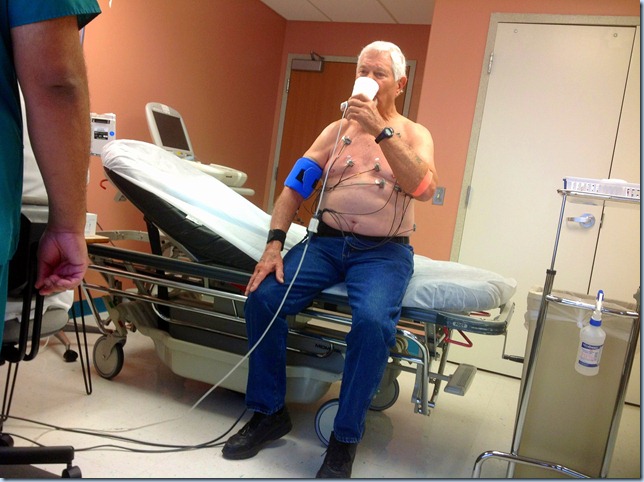 Yep, you guessed it, they attached all these wires to me, except this time one guy had to take some sandpaper and sand off a spot before he attached the wires.  OUCH!!  Now that hurt!!  I get along pretty good with the gals around these places, but you can’t trust these guys! They will hurt you!! 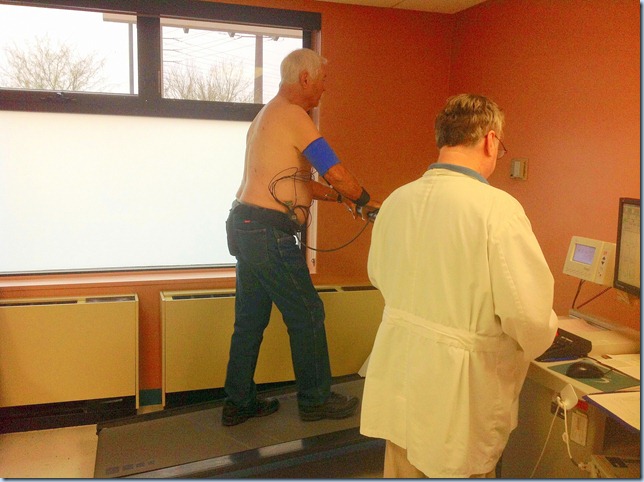 Then they forced me up on this tread mill with all this apparatus on and told me to “get walkin”!
I thought OK.  I’ll go along with them for a while and then maybe I can make a break for it and escape.  They kept turning it up faster and faster and raising the elevation.  Man, we were going to town...."uphill fast".    I was just about to yell at Ms. Pat and tell her “OK. shoot ‘em”  when they slowed it down and said I made it through the test and they were going to turn me loose.  I can see now why Ms. Pat made me leave my gun in the truck!!

When I finally escaped out of the Wickenburg Hospital, I strapped my gun back on and told Ms. Pat we were headed for HOME!!   She said "We probably should stop by the grocery store”.   I thought, "Hmmm, another trap!" So I just drove straight home…No Grocery Store!!

It rained all afternoon and evening.  I didn’t have any guns to clean since we didn’t shoot and I was all loaded up with bullets so I felt like I was on "vacation". Hot Dog! 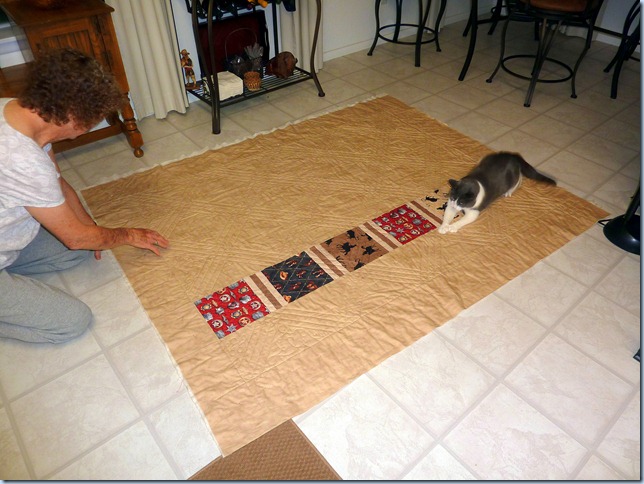 Ms. Pat and Megabyte2 worked on their quilt project and had a grand ole' time……. 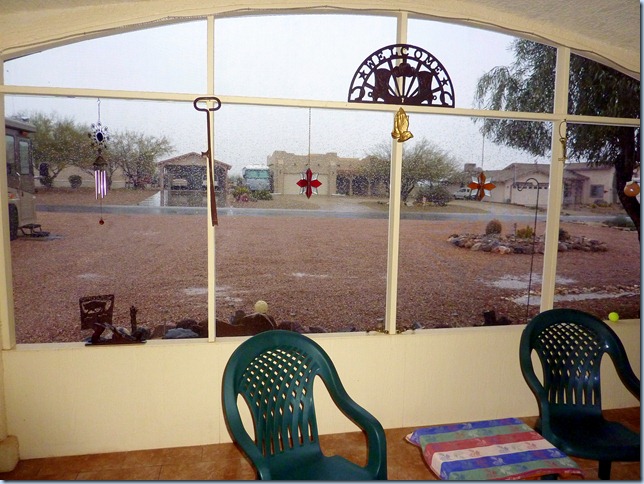 It rained and it rained.  I tell ya, rain is such a rarity around here, it makes you really appreciate it when it does happen. I enjoyed just watching it RAIN!! COOL. Praise the Lord..! 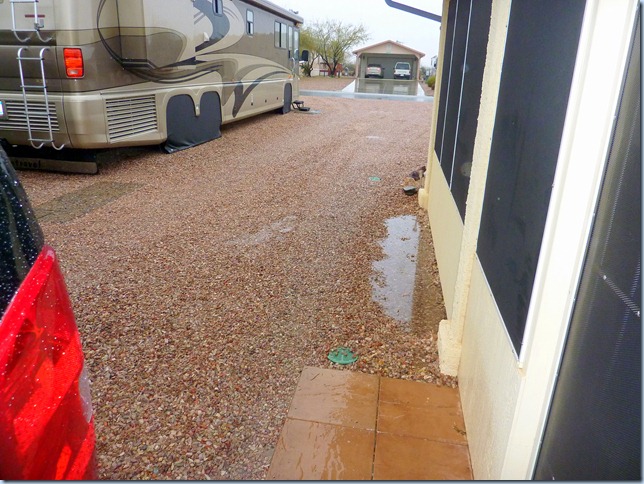 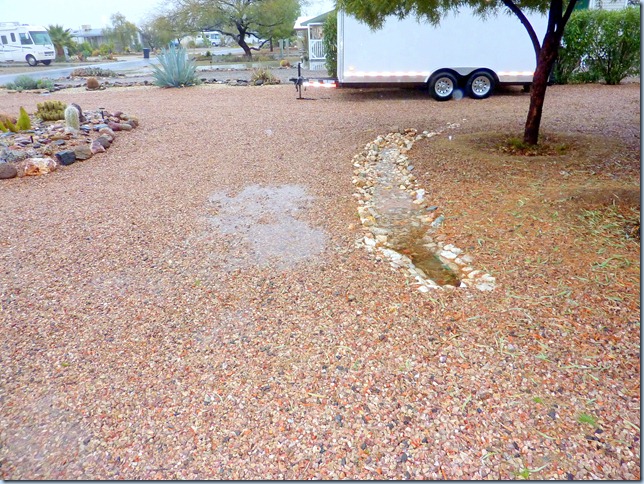 ...it deposits all the excess rain water out here in front and directs it around to the side of the house.  I really like the way it works and it's another one of the things that impressed me about this place. 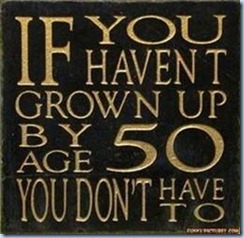 Thank you all for stopping by.  Hope you are all staying warm and dry….

This Blog is Published every Sunday and Wednesday..
Posted by Mike McFall at 8:52 AM

A very colorful depiction of your time at the Wickenburg hospital. Sure seems that you passed with flying colors though.

Yes, the rain is clearly helpful to desert flora.

We too have been enjoying this rain. Glad all went well with your tests!

Glad all that probing and prodding turned out good results.

Megabyte2 and Bella would make great friends. Bella doesn't let us do any crafts unless she has her say.

That poking & prodding medical stuff is always kinda scary but throw in a Redhead or two & it does take a fellers mind off things for a bit alright:))

It seems you have passed Another test. Keep up the good work. After all the rain, I saw new green sprouts on the desert floor today.

Glad your tests went well and you got a day off. Love the way the desert smells when it rains. It should be a beautiful spring!