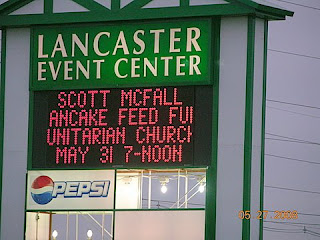 Yesterday was the BIG Pancake feed. It was a SUPER success!!! We were at the church at 5:30 am and the weather was perfect. It wasn't long until we had the coffee pots perking and the BIG Pancake Grill heating....We're in Business!! 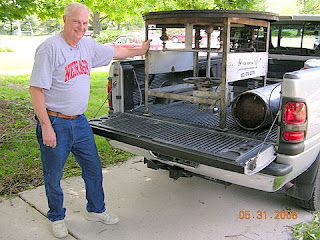 Here is the grill we picked up the day before and got it all set up at the church. It's HEAVY!!! They loaded it in the pickup with at fork loader, no problem.

Now UNLOADING it and reloading it was something else!!! Here is Larry Johnson, Scott's uncle who has been gallantly involved in setting up this affair. The grill guy told us "two guys can handle it"!! Ya, I'd like to see those TWO guys, it certainly wasn't Larry and I. That round turntable is solid steel and about an inch thick. UGH!!! Larry says "We need help"! I agree!!! 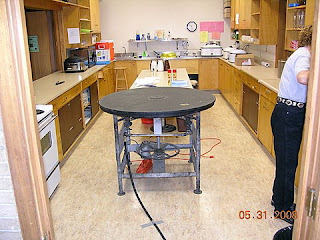 Help soon appeared and it wasn't long until we had it unloaded and carried about 75 yards into the kitchen of the church. Here it is all set up. Neat deal!! 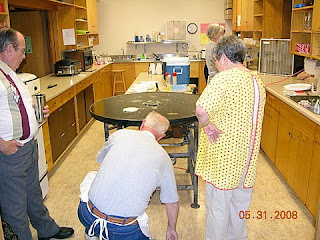 Time to light the fire!!! 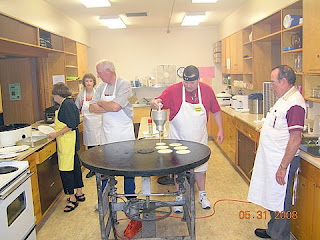 It wasn't long until it was up and running. After a few practice runs, we had it figured out. We think! ?,,,,,,, Here we have from left to right, Jan Clark, Ms Pat, Larry Johnson, Shannon Patrick and Bob Patrick. I hadn't seen Jan, Shannon or Bob for probably 30 years or more. Shannon, Bob and Jan's son, was just a small boy last I knew. What a fine young gentlemen now,,,,,,My, my,,,life does fly by!! Bob was a Game Warden and a good friend.......We had fun remembering the good ole days!! 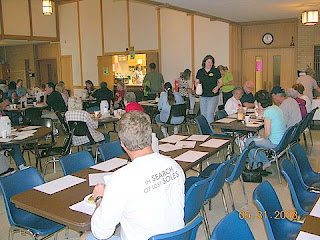 Lots and lots of Scott and Ann's friends came.......The pancakes were GOOD, the sausages were GREAT and the coffee and orange juice was excellent. 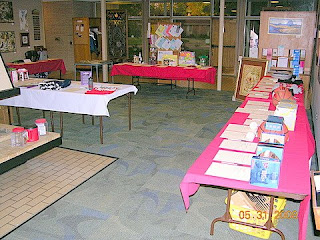 There were a TON of items up for silent auction and folks were bidding like wild!!! 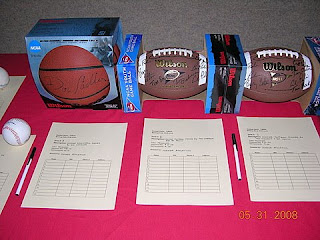 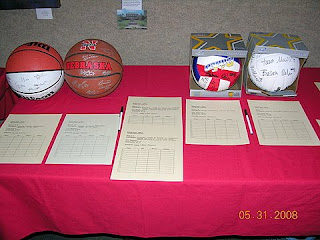 Volley Balls and MUCH, MUCH more!!!


GREAT NEWS was recieved early the morning of the Pancake Feed and the announcement was made and signs were posted:

The Insurance Co. had approved the second Transplant.... CHEERS went up all around the room!!! Hallelujah!!!!! What GOOD news!

Now all they have to do is get him well enough for it to happen.... 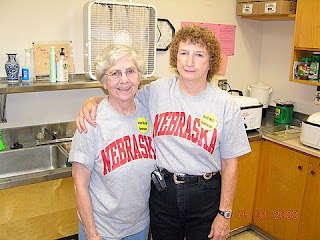 This is Karen Fish and Pat after we were all done and things cleaned up. Great Job!!!! It took a LOT of coordination and HARD work, but we all enjoyed it!!! Karen and I were co-workers at Dairyland Ins CO. for 14 years. We have a LOT of great (and a few not so great) memories that we share together. She was a great co-worker and is a good friend.... It was so good to see her again.

I think we all went home "dog" tired, but happy of the success!!! WELL DONE EVERYONE!!!!

We sure wish Scott and Ann could have been there, but that wasn't going to happen. Scott continued to have a tough week and Thursday he was hospitalized in Omaha. Something was wrong and the Dr wanted to find out what it was. They scheduled a Colonoscopy but after running some pre-op tests, they found out Scott's blood platelets were VERY LOW....they were down to 15 and should be in the 50 range. They can't do any kind of surgical procedure until the platelets are normal.

We talked to Scott and Ann after the Pancake Feed and it sounds like the diagnosis now is "Graft vs Host". I will try to explain it with the info I have but it is complicated and I may not have all the details correct. "Graft vs Host" means that Scott has a war going on inside. The stem cells he received from his older brother Michael in the bone marrow transplant are fighting to take over Scott's DNA, blood type and immune system but it's not working as fast as they hoped it would. That is the reason he needs the second bone marrow transplant to get more "warriors" to help win the battle. They are treating Scott with steroids to try to get everything under control so we can proceed with the second transplant. Like I told you, this is complicated and I hope I haven't totally messed this up but it's the best I can do with my limited medical knowledge.

We can't make any plans to bring Michael up here for the second transplant until Scott is ready for it so everything is on hold for now. Ann thinks they will get to come home from the hospital around the middle of next week so maybe we will have more news by then. Scott doesn't have his computer with him so he doesn't have any way to update his CaringBridge journal but please continue to send him words of encouragement. Your comments, support and prayers are what keep him going.

We can't thank all the fine folks enough that assisted with and came to the Pancake Feed in Scotts honor. Thank You, Thank you!!!! God Bless all that have contributed to his extreme out of pocket expenses, they are staggering.

Mike
Posted by Mike McFall at 3:02 AM

Glad to hear the Pancake Feed was a success. Hope you took lots of pictures for Scott to see.

It's good that you are there with him. I'm sure it makes him feel much better. Give him our best. The prayers are still coming.

Mike and Pat, I just learned from Froggie Donna's blog that Scott passed. Please accept Bette's and my sincere sympathies on your loss. It was his time, and I know you will focus on the good times that were had.
JimBob and Miss Bette

I'm here from Froggi Donna's blog to give you my heartfelt condolences on the death of your son, Scott. Blessings for your peace.

So sorry to read of your loss. My prayers are with you during this difficult time.
I made my way here via Howard and Linda's RV Dreams website.
God Bless You,

Our hearts go out to you on the loss of your son.