I only had one sibling, that was my brother Richard. Richard was born on December 22, 1943. Saturday will be his 69th Birthday. 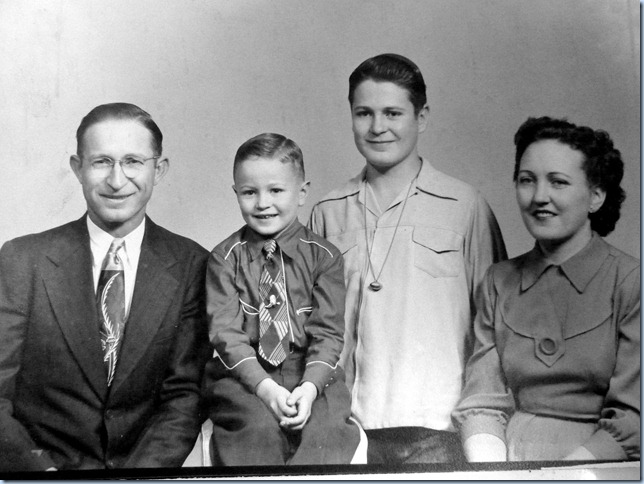 This family picture was taken in about 1953. Richard would have been 9 or 10.   I was always told that I looked like Mom and he looked like Dad. I never noticed before, but you can see in this picture  how that resemblance holds true. 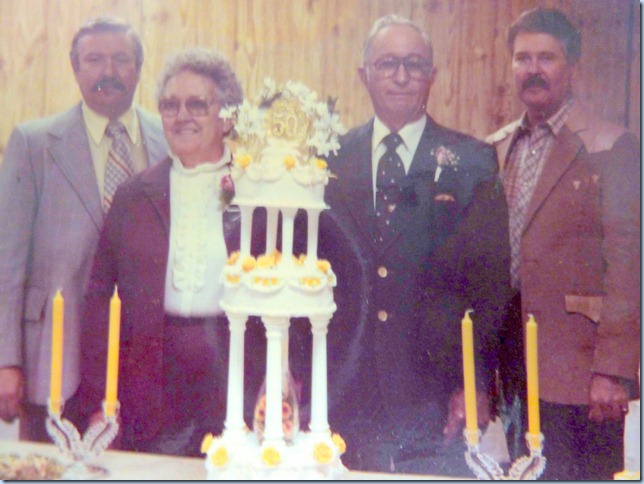 This is a picture of my brother and me with Mom and Dad at their 50th Anniversary celebration. I don’t have many pictures of Richard and these are two of the few. It would have been in 1983 when this picture was taken.

Unfortunately we lost Richard and he went home to Heaven October 12, 1997. I remember the day he died as if it was yesterday. We were full timing in our RV and were parked in an RV Park in Livingston, Texas. We were with our good friends Louis and Janette and were watching the Atlanta Braves play baseball on TV.  We were all avid Braves fans and watched nearly every game. I remember we were all sitting in our RV and I happened to look out the window and see a Sheriff’s car patrolling up and down the streets in the Escapee’s RV park. I remember how odd I thought that was, something I had never seen before, patrolling the streets of an Escapee's RV Park.  I mentioned to everyone about that and that this sure wasn’t a high crime area. But the game had our attention and we went right back to watching it.

Suddenly Ms. Pat said “Well, that Sheriff’s car is parked right out in front of our RV and the officer is coming to the door”!  I thought Good Lord”, what did I do? My first instinct was to run and hide.  I laughingly told Ms. Pat to tell him I'm not home!  Sure enough, the deputy asked if this was the home of Mike McFall.  I was always one that knew it was best to meet problems head on, so I decided to “give up” peacefully.  I immediately ran to the door and the officer said “Are you Mike”? I told him "Yes sir!   He went on to say that he had a message that my brother had just had a massive heart attack and that I should call my parents immediately. Wow, I was stunned.

Back in those days we didn’t have cell phones and Internet anything like we do today.   Most of the time hardly no one knew where we were.  Except my son Scott in Lincoln, Nebraska. Scott kept pretty close contact of our whereabouts. He worked for the Nebraska Highway Patrol and kept a description or our RV and the license number just in case of an emergency such as this. My mother knew to call him first if they ever needed to locate us. He knew we were in the vicinity of Livingston, Texas in an RV park. He wasn’t exactly sure which one, so he called the Sheriff’s office and had them check all RV Parks in the area. Well the Escapee’s headquarters RV Park is quite large and well known, so I’m sure it didn’t take the deputy long to figure out where we were.

So we immediately ran to the office and got on the pay phone and called Mom. She was extremely upset and told us that Richard had a massive heart attack and did not survive.  That was a terrible shock and set back to us all.  He was only 53 years old. We told Mom that we would be there ASAP. We immediately left our RV in the park and drove non stop to Alliance, NE to be with family.  This was an extremely hard time for my parents as it was for my brothers family. Richard was a superb family man and had 3 beautiful girls.  We drove straight through for over 24 hrs to get there.

I want to dedicate this Blog to my brother Richard today in his honor. He was a great guy, my one and only sibling. I remember at the time thinking how difficult it must be for my parents to lose their youngest child. They never ever got over it, and I now see, many years later why. You just don’t get over it. You go on with life, but you never get over it.  How well I now understand.

I have missed Richard more than anyone will ever know. It is the honest truth when they say you miss things more when they are gone. I can attest to that with my own two boys.  First was my Brother, then Dad and Mom have both since departed this life and moved on to that great life in Heaven.  I’m still here holding down the Fort, so to speak. But I know they are all up there above smiling in that “better place”. Praise the Lord!

So Richard, ole Buddy, I want to say HAPPY BIRTHDAY!!  You are missed BIG TIME!

Thanks for stopping by….

This Blog is Published every Wednesday and Sunday..
Posted by Mike McFall at 8:10 AM

A lovely tribute. Brought tears to my eyes.
Merry Christmas to you and your family.

Happy Birthday Richard, I'm sure he is celebrating in Heaven right now. Lost my brother two years ago and I miss him everyday. Merry Christmas to you and Ms Pat.

Mike , Hope you have a day of great memories.Talk about lifes' parallels,you and I are retired LE, and I too lost a brother Richard in his early 50's , mine to cancer. and yes we were also very close.At least I made the trip to see my brother Rick a couple weeks before he died, you didn't have any warning. Be safe out there my friend. Sam & Donna...

What a nice tribute from a big brother.

He is having a much bigger celebration in Heaven than he could have ever had here in earth.
God bless you two and a very Merry Christmas.

Wonderful tribute to your brother. The memories are always ours to cherish. Merry Christmas to you.

Such a great tribute. Since my only brother died suddenly 11 months ago, I can attest to the pain on their birthdays. As much as I miss him, his death has been much more painful for my elderly parents with whom he lived. I don't think a parent ever recovers from outliving a child, regardless of the child's age at death.

Nice tribute to your brother Mike. You have had a lot of loss in your family.

Nice tribute to you brother..thanks for sharing your thoughts.

wonderful tribute to your brother...thanks for sharing..Merry Christmas to you and Mrs. Pat...