Here it is the 2nd day of January and we are off and running. On New Year's Eve day, my Dr. wanted to see me. What the heck??  A doctor appointment on New Year's Eve?  What goes here?  He wanted to see me in his office due to the results of some recent blood work. That kind of alarmed me but couldn’t it wait until some other day than New Years eve?  Ms. Pat told the nurse “OK, we will be there."  I hate that long trip way over to the East side of Scottsdale.  It's about 80 miles and seems like going to Texas.  Anyhow, on the morning of Dec 31st, we headed off to Scottsdale, AZ to “visit” with my Oncologist doctor.  We decided to get a bunch of shopping done as long as we were making the trip.

This is the beautiful sight we saw as we got close to Carefree, Az. north of Phoenix. These folks were
having fun and probably making their last flight for 2012. 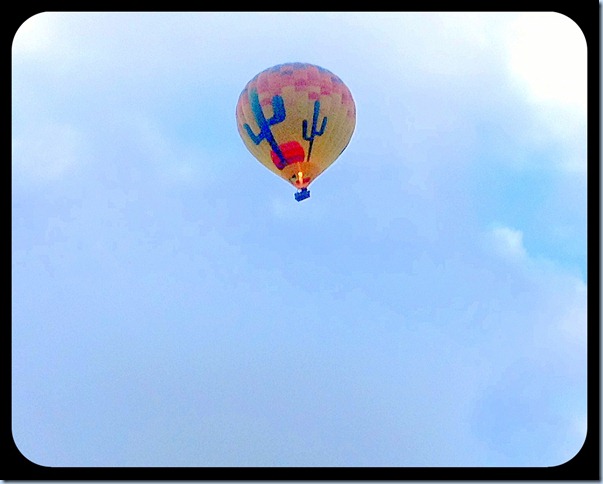 This one flew right over the highway. What a beautiful balloon! Ms. Pat took this through the windshield with her iPad. Nice job, my Dear!!

We got a kick out of these overhead signs that were all over the highways in the Phoenix and Wickenburg area. “Drive Hammered------Get Nailed” !  I hope they got the message across to the right people.

We made it to the doctor's office and had our little meeting and made a few decisions on how to continue our defensive way of handling this Prostate Cancer thing.  If one thing quits working, as the Lupron shots have, they always have a few other tricks up their sleeve.  I feel like a Guinea pig…as they try all these new meds on me to see if they work.  But that’s OK...I've been biding my time pretty well so far.  I've been hassling with this since before 2000.  Wow...can't believe it's been 13 years.  Let's hope we can keep up a good fight for the next 13+ years.

After the doctor appointment, we took off shopping and getting supplies. We hit almost every store we could find. Costco's, Sam's, WalMart  and oh yeah, I even stopped at Sportsman's Warehouse where I found the last 8 lb. jug of gun powder they had. We hurried as fast as we could because we were anxious to get back to North Ranch.  It was New Year's Eve, you know, and Ms. Pat's line dance class was having their annual New Year's Eve dance.  Yep, I went and didn’t complain or moan and groan one time! (not out loud anyhow).

I had a good time and saw some good friends, and yes...I even danced at least once....with Ms. Pat of course!!   It was a cold night and we about froze riding the golf cart the long 3 blocks home!!

New Year's morning was the coldest morning we have had so far this winter.  I went out before I went to bed and turned the heat on in the Motorhome and in my shop.  When we woke up, it was a chilling 28*.  It managed to get up to a high of 50 and turned out to be a bright sun shiny day.   Ms. Pat even went out to the Pistol Range for her Ladies shooting class.  I stayed home and watched my Corn Huskers get beat by Georgia in the Capitol One Bowl game. It was a good game and Big Red was holding it's own and stayed barely in the lead until the 3rd quarter. Then things went, well you know “where” in a hand basket!! 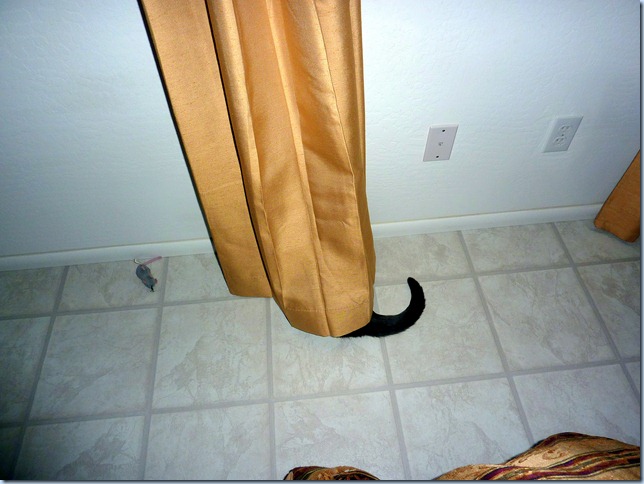 I had to take a break away from the game on TV and play with Ms. Megabyte2 a few times.  Here she is hiding from me and her mouse behind the curtain. I bet she doesn’t realize her tail is sticking out!! 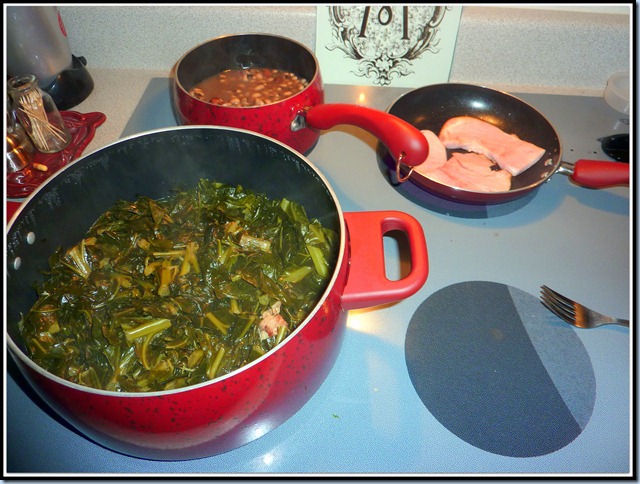 Ms. Pat made it home just before HAPPY HOUR, in which we had our traditional toast of Champagne as she was completing the preparation of the also traditional New Year's dinner of Greens, Black Eyed Peas and Ham with all the trimmings. It was simply delicious.  WOW, what a GAL!!!

Then at 6:30 the Florida State vs. Northern Illinois Football game started. It was the Orange Bowl in Miami and turned out much better, as FSU won!  It was a great game but I must admit that neither of us made it until the end…… close tho!!

We hope you all had a wonderful New Year's Day and it continues on throughout the year.

Thanks for stopping by and come on back again, any ole' time! 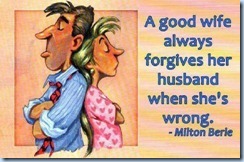 This Blog is Published every Wednesday and Sunday..
Posted by Mike McFall at 8:19 AM

Here's wishing you another 33+ years (not 13+)of enjoying life with Ms. Pat. We go back to the oncologist for Jim in February. So far so good for us too. Happy New Year.

Glad to hear that the Doc has a few more tricks up his sleeve...here's a prayer for many more healthy and happy years ahead. Take care and stay warm!

A man can live for a long time with prostate cancer. I know a guy who was diagnosed over 30 yrs. ago and as far as I know is still alive. Get some raw, bitter apricot kernels and start eating them. Do some Googling on them and read the articles. Some pro, some con, think of the money trail. My best to you & Ms. Pat in 2013.

Happy New Year Mike and Pat--here's wishing for many, many more healthy years for you!

Really like that photo of Ms Megabyte 2 in the curtain. Guess we are all lucky to be in this day & age of medical choices, options & advancements. Cancer research is ever moving forward & you are living proof that it works. Not likely something you would have volunteered for, but it is people like you who are carrying those medical advancements & research forward to the next level. Keep up the good atitude Mike, close your eyes going through all that Scottsdale traffic & continue to work with those Doctors.....

Hang in there Mike these Doc's have all kinds of ways to take care of things now days.... They supposedly have mine in remission, but they check on me all the time so I wonder if they really think so........

Those greens and the black eyed peas look delish! How did Pat prepare the peas? Noah got her second mouse for Christmas and as usual, Olivia wants to snare it.

Hello, I am brand new to blogging so not sure if this shows up or how it works. I also have dealt with cancer, mine was breast cancer and I am almost 2 years past. I hope the best for you and your health. We are working at full time Rv'ng in the near future and looking forward to it...