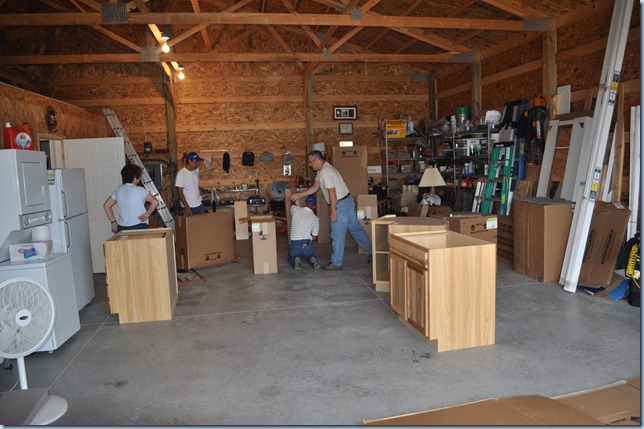 Wednesday morning, shortly after I had published my Blog, the cabinet installers came and began unboxing everything. 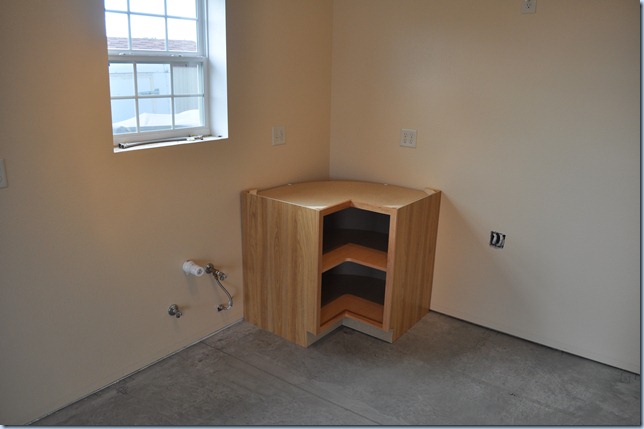 Soon the FIRST cabinet was installed. 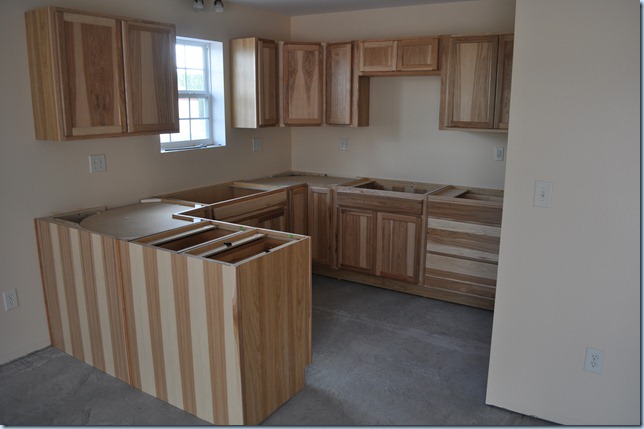 By quitting time, they had them all installed. 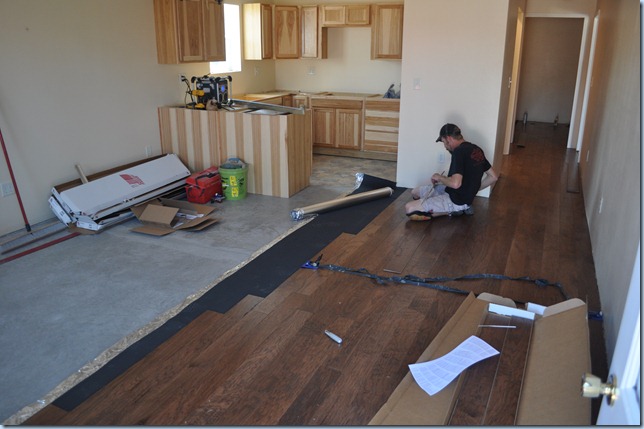 Then on Friday, the floor installers came bright and early and it didn’t take them long to get started. 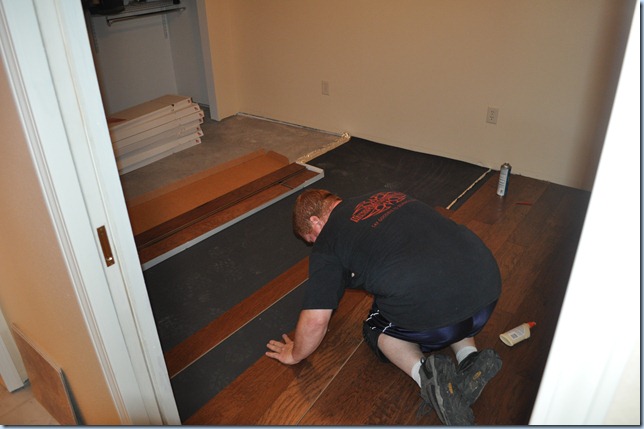 Two installers were going at it hot and heavy. One in the front living area and the other (above) in our Bedroom. 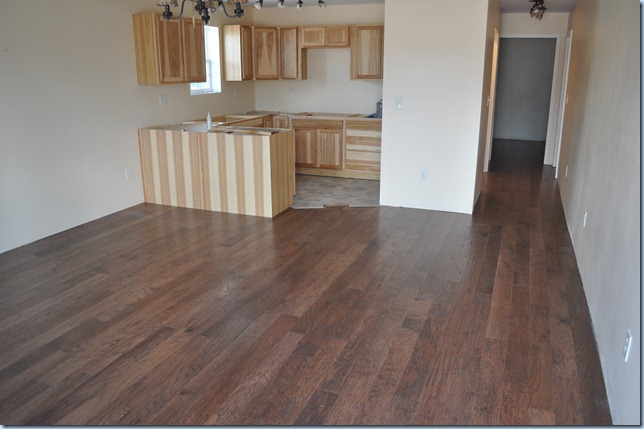 By early afternoon, they had it all completed.  It really looks good. We are a little concerned with the way the piece of paneling looks on the front of the peninsula. There will be an extended counter top there for an eating area and later there will be bar stools in front of it.  We don't know how that will change the appearance so we will wait until the counter tops are installed before we make a decision. If we don't like the way it looks, we may change that panel.  In my opinion, it just doesn’t look right and it sort of jumps out at you but we will see. 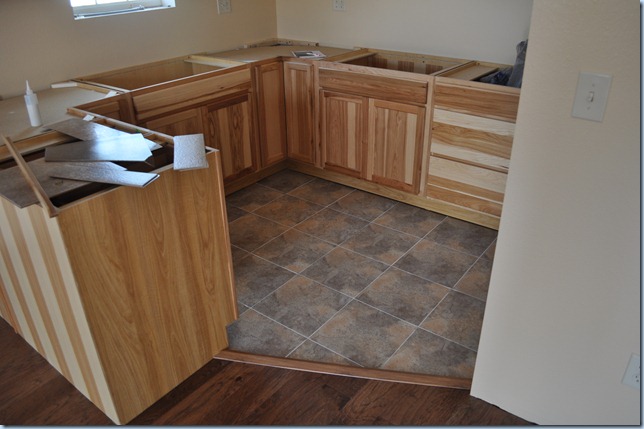 The tile in the kitchen and bathroom look great. The colors worked well together. The pictures don’t bring out the exact coloring but again Ms. Pat did an excellent job. 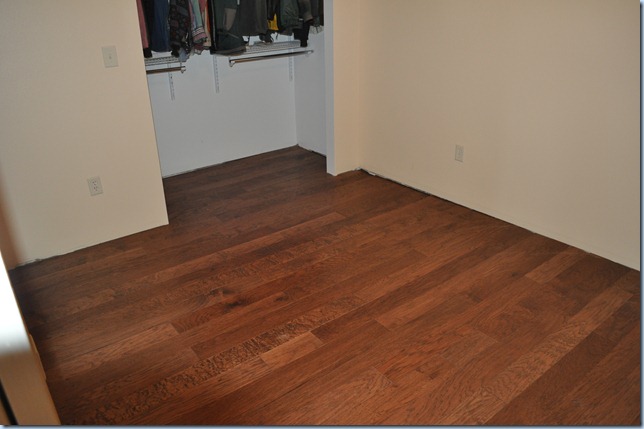 This is the bedroom and is now ready for the mirrored doors to be installed on the closet. 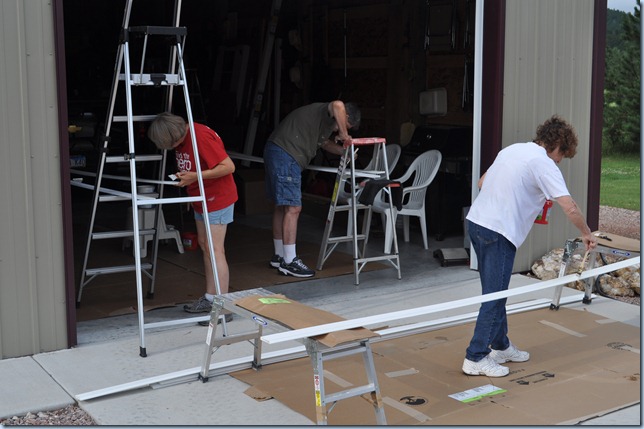 Meanwhile, we had to get the baseboards all painted and ready for the finishers to install....so we had a painting party! With the super help of Ron and Barb, we had that accomplished in short order. Now we are on hold again until the counter tops are completed and the finishers come back, which we hope is in the not too distant future. But it seems the only ones in a hurry are us!! 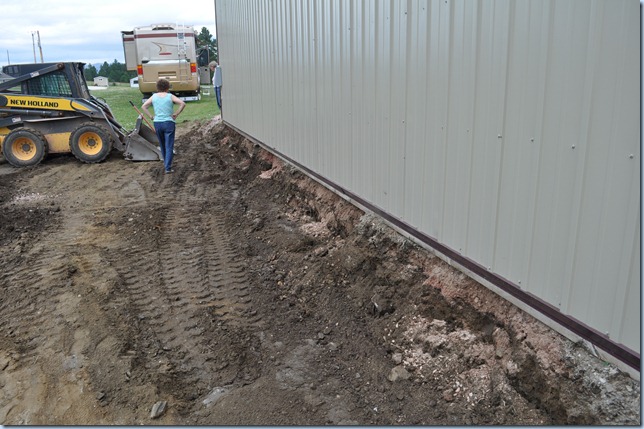 Another project we have had going on all this time was a little dirt moving along the West side of our building. 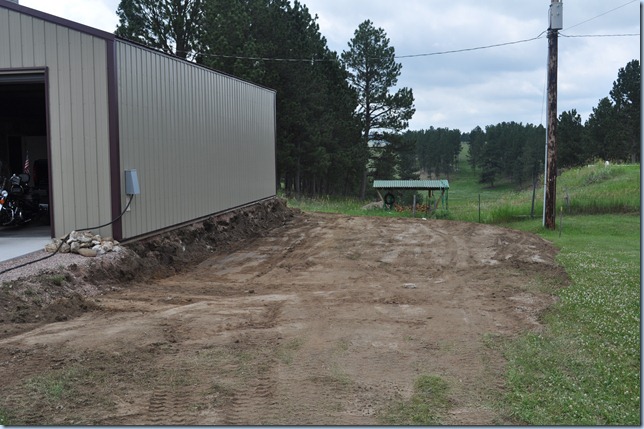 It dawned on Pat and I one day that this would be a great place to level so we could park our Motorhome and maybe later even put a roof over it. The hail storms we have up here in the summer are a worry. We have been lucky with some close calls the last few summers. This isn’t something we will do right away but we wanted the groundwork laid in preparation for some future plans. 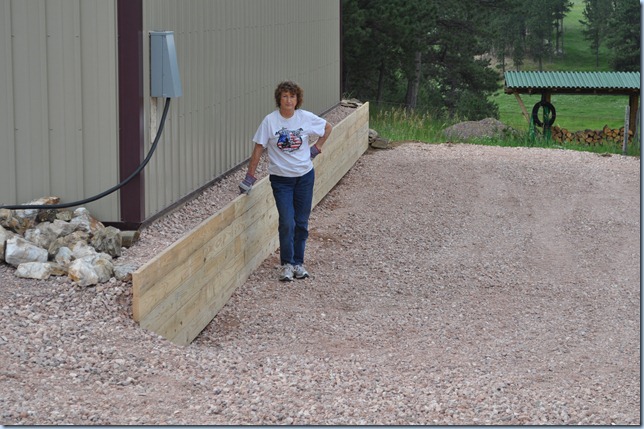 There, now we can let it settle and give it more attention later.

So that’s about it from our little place on the Hill in the Black Hill’s of South Dakota. The head is healing fine and I want to thank everyone for the emails and comments. Much appreciated! I have gotten used to the staples in my head; however, I will go back in on Friday and have them removed. I don't think I want them as a permanent fixture. Fortunately it hasn’t bothered me in the least.  I told Ms. Pat that it’s a good thing it was my head cause I don’t use that much anyway!!

Update:  Rollie and Gina (now known as Pops and Gigi) have a new addition to their family.   Little Abigail Faith Thurston arrived on July 27.  Mother Ashley and Little Abigail are doing fine.  There are lots pictures on Rollie and Gina's blog and I'm sure there will be lots more to come.

I hope you are all having a wonderful summer and your travels are all safe! Thanks for stopping by.  If you're in the area, stop by and see our "work in progress".

We are truly blessed and we continue to thank our Heavenly Father for his bountiful blessings.  Without Him, none of this would be possible.

This Blog is Published every Sunday and Wednesday..
Posted by Mike McFall at 6:43 AM

Wow, you guys are making great progress. I'm glad you're waiting until you put some furniture in before you decide what to do with the front panel. I think it'll look very different. Don't work too hard.

Your floor & cabinets look great, even the outside parking are came out nice too. You guys will sure have a great place there when it's done. Be safe out there. Sam & Donna.....

Wow your place is coming along nicely.... LOVE it!!! Congrats to Gina & Rollie ♥
Have fun & Travel safe
Donna

Wow, looking like home now. You can park the motorhome for the summer and not use it when you get done.

nice work on the kitchen and the flooring..it all looks very nice!!!..and by the way..that does look like a great place to park the motorhome!!

I'm inclined to agree with you about the front of that cabinet. Hail stones can sure mess up a vehicle pretty fast & I think if it was me I would be wanting to get a roof over the rig now that you have laid the groundwork for maybe a cement pad. From the location of that head wound you won't be able to easily show off the Frankenstein stitch once the staples have been removed:((

Here we are just weeks away from hitting the road and enjoying our retirement, then we read how busy your retired lifestyle is and it scares us... ;c)

We love the Black Hills, too and can see why you have a little place there.

I love the cabinets and the floor!! Everything is really looking GREAT!!
I know you all are so proud and looking forward to having it all complete.
Take care!