Monday morning started off with a BANG!! 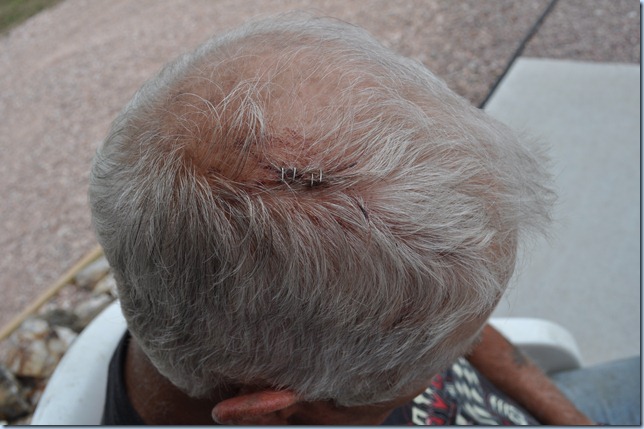 At 6:30 we took off for the Park for our morning walk which took about an hour and then rushed home as we had several things going on. The floor installers soon arrived and began prepping the floor for installation of the new floor. Ron and I moved the Refrigerator and the Washing Machine out of the way.  Shortly after that, the Dirt Movers arrived and began leveling the West side of the "toy barn". Remember in my last Blog, I showed you a picture of the West side of the Toy Barn and said "Stay Tuned".  Well, there's still more to come but it will have to wait for another time.

Everybody was asking questions and discussing how things could be done....we were running in a vicious circle.  About the time we thought we had everything lined out, the floor guys told us they had a problem! A BIG problem. The floor covering we had selected wouldn’t work.  WHAT???  Won’t work?? It seems the floor had some unlevel areas and Joe, the installer, said it was impossible for him to install that type of covering on our floor.  He told us he knew we wouldn’t be happy with it. I don’t know why the folks that came out and measured and inspected the floor several weeks ago didn’t tell us that??  WOW!  So we have to start all over again.   Have I told you that I just love building stuff!! Ms. Pat and I had to go to Rapid City and pick out another type of Flooring.

Quickly, before I did anything, Ron’s tanks needed dumping. I had purchased a new Macerator and100’ of 3/4” hose so I could easily dump our visitor's tanks. I hadn’t used it before and Ron and I began hooking things up. It worked perfectly and did a superb job. Suddenly I jumped up to run over to the sewer hook up and inspect the discharge, when BANG!!! I smacked into the Bedroom slide out.  WOW, that staggered me for a second but I continued on over to the sewer connection rubbing the new knot on my head and muttering some not so nice words like “darn” and a few others. I thought to myself, "Boy that’s quite a knot!!"  Then suddenly I noticed blood running through my fingers and down the side of my face. It was really bleeding. I asked Ron to take a look and if it was much of a gash?  OH DEAR....yes, it was quite a large cut. I hollered at Ms. Pat and asked her if it needed sutures. She said, "Yes, indeed it does!!"  She ran for a cold cloth and some ice. Shoot, I knew I was destined for the Custer Hospital Emergency Room and off we went with Ms. Pat driving.

A little over an hour later I was home with 4 new clamps in my skull…. Good as new!  It really didn’t hurt much and the cold ice felt good. They didn’t have to use any pain killer on me when they put the staples in. That smarted a little but not bad.  I was totally perturbed at myself for such a dumb trick.  Gee Whiz, I have been working around these slides for over 15 years now and I’ve bumped my head many times.  Doesn’t a guy ever learn??

Like my dear mother used to tell me, “You need to slow down!"   I heard that!!

Barb said she would go to town with Ms. Pat so she could pick out new floor covering and they left me home to supervise the land leveling job. When they got home, they had samples of the new flooring and I believe Ms. Pat was happier with it than she was with the original choice. So, things usually do happen for the better…. 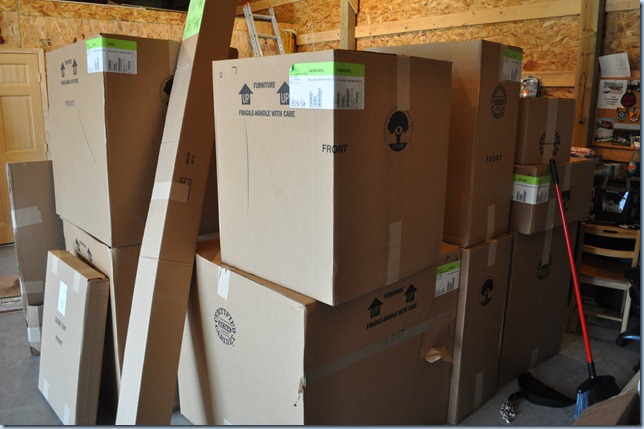 Yesterday, the Kitchen Cabinets arrived and today the installers will be out to install them. So we may not have a floor but we HOPE to have cabinets, TODAY!!  Then Thursday the Floor may even get installed.  Remember what I said a couple weeks ago....."NEVER WEAKEN". We will get ‘er done!!  Lord Willin'.

We had a "going away" Happy Hour and dinner with Bill and Kathie last evening.  Today, they're headed for Deadwood!!  That should be lots of fun!  Travel Safe guys and hurry back to see us.

Travel Safe Everyone and God Bless You All!

This Blog is Published every Wednesday and Sunday..
Posted by Mike McFall at 6:09 AM

That is quite a nasty gash !!! I know sometimes we do the silliest things. I have almost walked into the bedroom slide so many times. I know it's there but ???? I now put those pool noodles on the corners.
Take care...

That's quite a nasty hole in the head. Glad to hear things are coming together.

Ouch! That's not the way you're supposed to use your head. :)

I know that hurts. Keep on keeping on. Good thing you have a hard head, like me. You didn't hurt the slide, did you?

I did the same thing last year on our bedroom slide. And man does your head bleed. We just happened to have two emergency room nurses camped next to us who came to the rescue. They pulled the gash together and taped it down real good and then sent me to the clinic. The doctor said they did such a good job that she ended up just gluing it - no staples or stitches. Sure hope your head heals rapidly.

Looking forward to pictures of the cabinets and flooring. It's getting there.

That's quite a nasty cut on your head...those slide outs can be vicious. Glad it was no worse than you experienced.
Glad things are coming together for you guys.

Ouch! Those slides can be killers! Glad you got the floor covering dilemma solved! Hugs

Sure hope your brains didn't leak out!

Wow you are making me tired just reading about all the activities going on at your household.

Those look like some nasty clamps, hope you heal up quickly!

nice gash!!...you are retired?..remember?..you need to slow down..what doesn't get done today ..there is always tomorrow!..good luck with the floor install..you would have thought that when they came to measure they would have told you that it wouldn't work..geeesh..all in the name of making a sale!!

Oh my goodness...your poor little head! Well....sounds like the perfect excuse to hit the easy chair and forget about all those construction projects for a bit! Take care!

Glad to see there wasn't any worse damage. you must have a hard head like I do.When Denny Cave did that he put some kind of rubber edging on his slide when it is out. Might ask him about it.Be safe out there, and take a couple of cans of pain killer tonight at happy hour. Sam & Donna..

OUCH!!! That looks painful~ maybe you should by some of them beach noodles people are using on their slideouts to keep things like that from happening!
Take Care
Donna

Ya know Mike, I think you just smacked your head on that slide on purpose so you wouldn't have to go to town shopping for more flooring. I'm right proud of ya for being so clever:))

Ouch!! That had to hurt. Now I am so glad that Charley puts pieces of "noodles" on our slide-outs to keep him from doing this, because he would!! Hope it gets better quickly and that you don't have anymore surprises with your flooring!!

Ouchie! Glad it wasn't as painful as it looks.

That is a serious gash! Sure glad that something positive (like the arrival of kitchen cabinets) made for a better day overall. Hope the flooring job gets done soon too!

Ow! Ow! Ow! I'm sure that's what I would have said ;-)! And what other good words did you come up with? Glad your sweet wife was able to come to the rescue and you didn't suffer a concussion, too. Good excuse for taking it easy for awhile.

Just like an old cowboy, it is just a little cut or it's only broken in a couple places, I'll just work around it, or numb it - are you crazy, its just a little cut go ahead and put those stitches in and get er over with.
Still tough as nails and like me forever the klutz. Glad it was only a 'small' cut and you are okay.
You inspire us Mike....

Well thank goodness for hair because that might just leave a mark! Give it a week and you'll be back to new in no time, lol.

And Thank You for the warm welcome! Cheers! ~M

Next time, we will pull that slide in so no one will crack their head. Despite the hiccups we had, all is coming together slowly but surely. It is exciting being here and seeing it as it happens. Thanks again for the "campin' site."

How about a picture of the damage that blunt instrument did to the slide?

HOLY COW! That's quite a gash. Stu has bumped/scraped his head way too many times on the bedroom slide. Now we keep pool noodles on the corners. Be careful!!! HUGS!