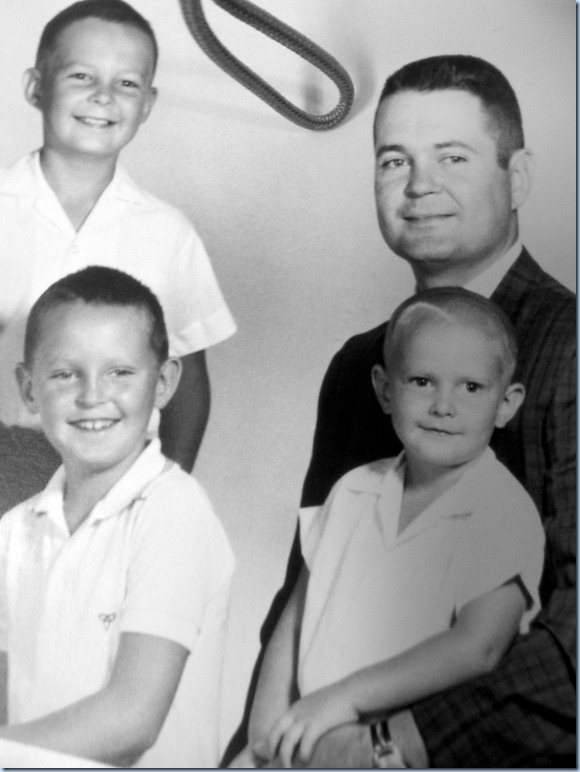 Here's another "Oldie" .... another of my “Old Pictures” that brings back lots of memories.  I’ll bet that is what I’m telling my boys right about now way back when this picture was taken.  I’m not sure what year it was taken, but it was back when I was a State Trooper in Nebraska. Top left is Mikel, below him is Pat and sitting on my lap is Scott. We had lots of great Christmas's when they were young.  They were always waiting for Santa Claus to come to town.  While I was up half the night putting together what ever it was that Santa was bringing them….LOL.  We all remember those times don’t we?  They were Great Times! 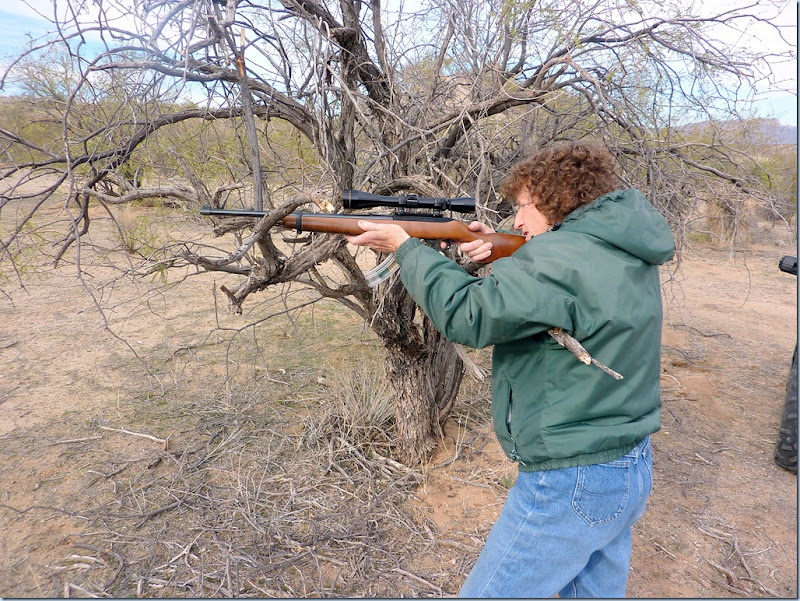 Remember me showing you this picture of Ms. Pat shooting her Ruger 10/22 rifle? Well, look below at how I changed her Rifle’s looks completely.. 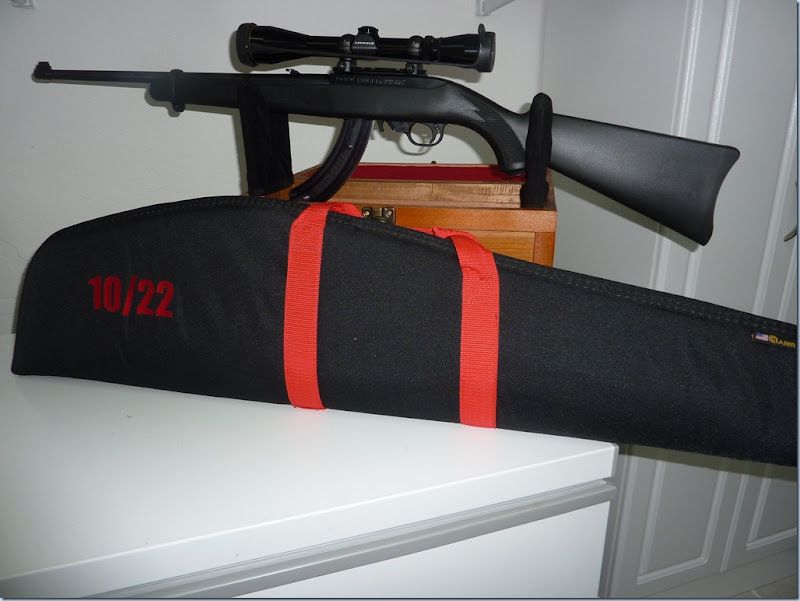 This is how I revamped her gun....doesn't look like the same rifle does it? I changed out the stock to a black synthetic one and added a black 25 capacity Magazine. I'm calling it the "Midnight Special"! 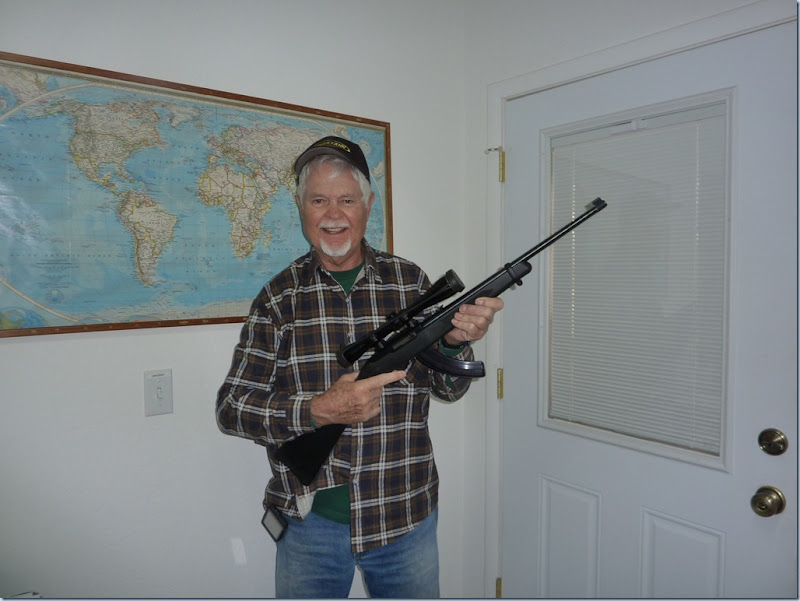 Hey, I wonder if she will let me shoot it? While I had it out of it's stock, I took the trigger assembly apart and modified it somewhat. I took out the little piece that holds the Bolt back and modified it so that it’s a lot easier to release the bolt now.   Ah, now lets go shooting!! 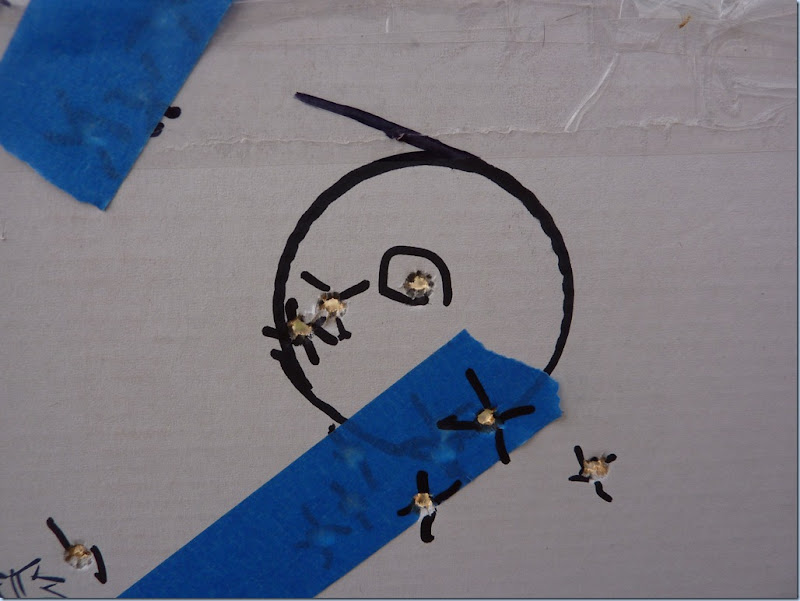 OK, we went shooting yesterday and this was Ms. Pat’s 6 shot pattern……… the big black circle is the "Bull's Eye"   Not bad huh?  Good shooting Gal!  It was a very enjoyable afternoon of shooting and we put a lot of lead into the hillside. I’m having a little problem sighting in one of the Scopes.  Seems I can’t raise it enough to get it on target.  Does a guy ever have to shim these mounts?   Hummmm, like I said before, I'm a "Pistol" guy.  I don’t know too much about these rifles. Sure wish my good buddy JRoger was here. I’ll have to get up with him for some advice. 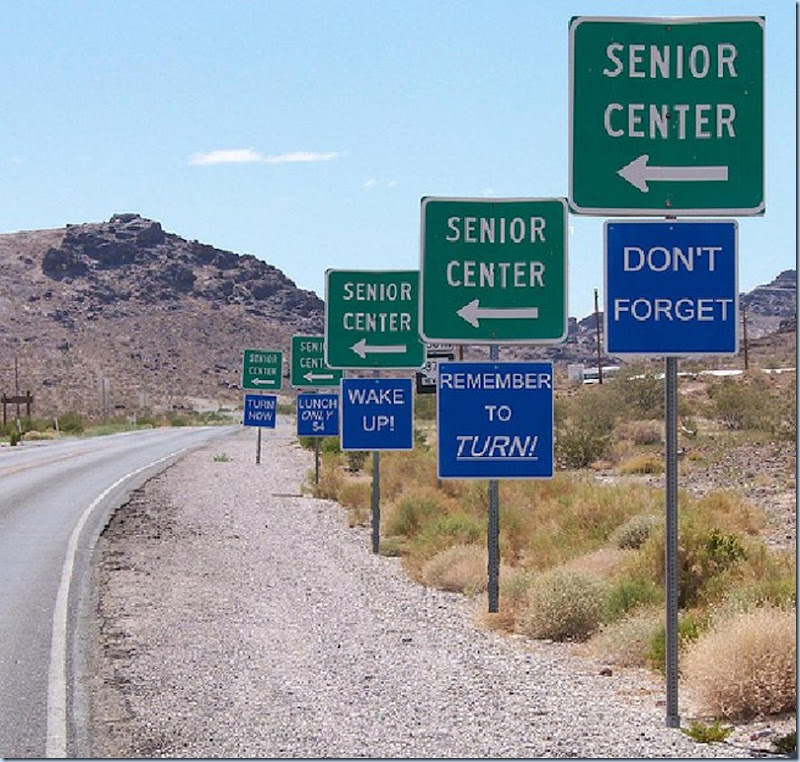 If I happen to post a picture or write something that I have already done before, remember us Seniors do sometimes have memory problems.  Please bear with me, this might happen to YOU someday!

This Blog is Published every Sunday and Wednesday..
Posted by Mike McFall at 9:01 AM

Merry Christmas to you and your family.

I know nothing about shooting but that sure does look like Pat got most of those bullets in the right place. Way to go. Love the final picture - sure does apply to us more often than I like to think about.

Happy Holidays to you and Ms. Pat!..hope you have a great Christmas!!

Love the black and white photo. I will never complain if you repeat yourself...I do it all the time.

Love those signs...I know the feeling. Keep watching for the Big Guy..won't be long now.

you better behave yourself Ms Pat has quite an aim...those signs are funny...they should have one in front of it says "Here's your sign"...love the photo..how I remember putting toys together half the night on christmas Eve...but it was well worth the smiles in the morning...have a very Merry Christmas...

Hope you and Ms Pat have a very Merry Christmas and a Happy New Year!! And I loved the signs.... we have those senior moments too, but so far only occasionally!!

I really enjoy reading your blog. The game cameras look neat, might have to get me one of those. By the way I am from Scottsbluff, NE, live in Oregon now but go back each year to visit my family. We are heading south this year for some snowbirding! Doug Hinman

Love the photo of you and the boys! And the Senior Center directions!!