Yep, turned on the TV this morning and heard all about another "deadly home invasion" down in Phoenix…a Mother shot and killed.  Almost every day they have this type of thing happening along with car jackings, robberies, muggings and all types of crime. Fairly normal for the larger cities anymore but it is creeping into the less populated surrounding areas.

We have noticed a great interest in the large amount of Women that are getting and planning on carrying a Gun. Every Gun shop we go into we see ladies of all ages looking and buying a gun. Now I’m not going to get into the politics of all this gun owning and carrying thing but it is happening. One thing that is very obvious from all of this is that a lot of folks end up owning guns of all types that don’t have any training on how to use them and this is not a good thing.

Ms. Pat was talking to a lady at, of all places, Line Dance Class that had recently gotten a hand gun and was interested in getting some training and she mentioned that the local Wickenburg Sportsman's Club was having Ladies Pistol orientation, training and shooting classes every Tuesday.  Ms. Pat picked up on it immediately and came home and told me about it.  I told her I thought it was a wonderful idea.  I am always interested in gun training at any level.  She has shot with me in many of my qualification courses in Florida and has had a lot of training while we were at the Custer State Park in South Dakota. But you can’t get too much..  Shooting is a perishable item and if you don’t practice, you will lose a lot of the skill. 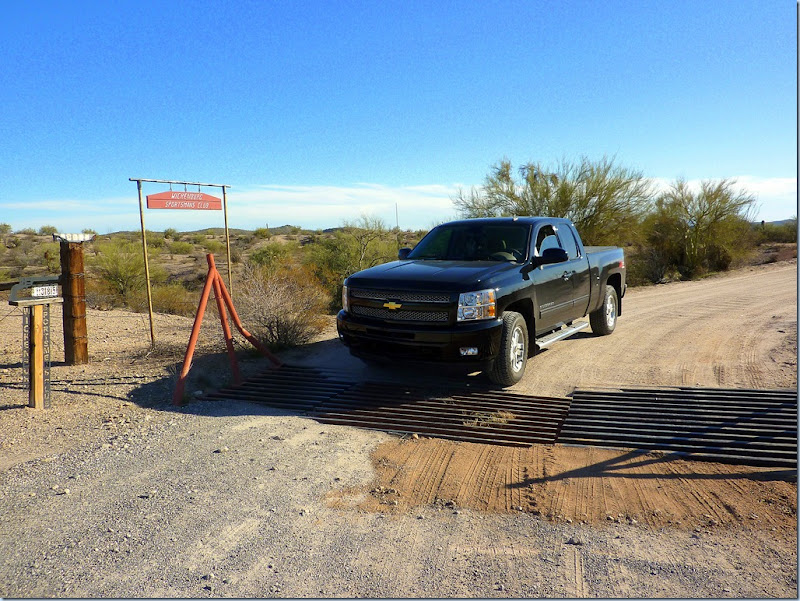 To make a long story short, Tuesday Morning we found ourselves at the entrance to the Wickenburg Sportsman’s Club. 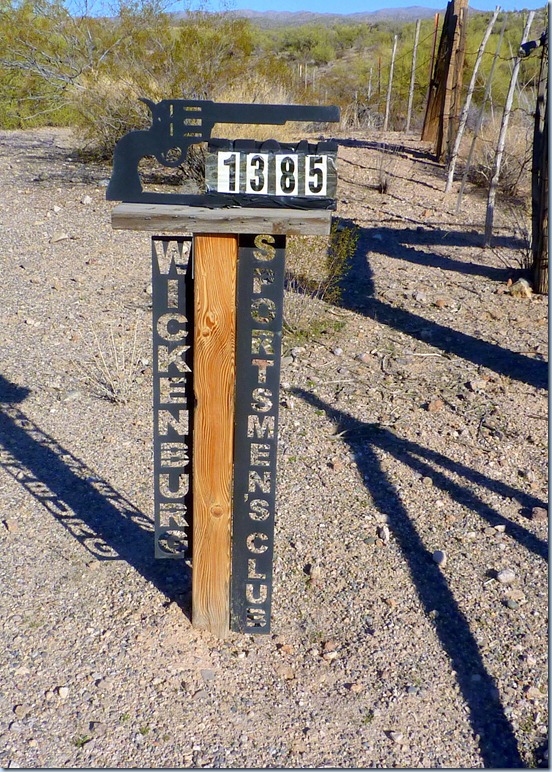 I was impressed with their Mail Box.. 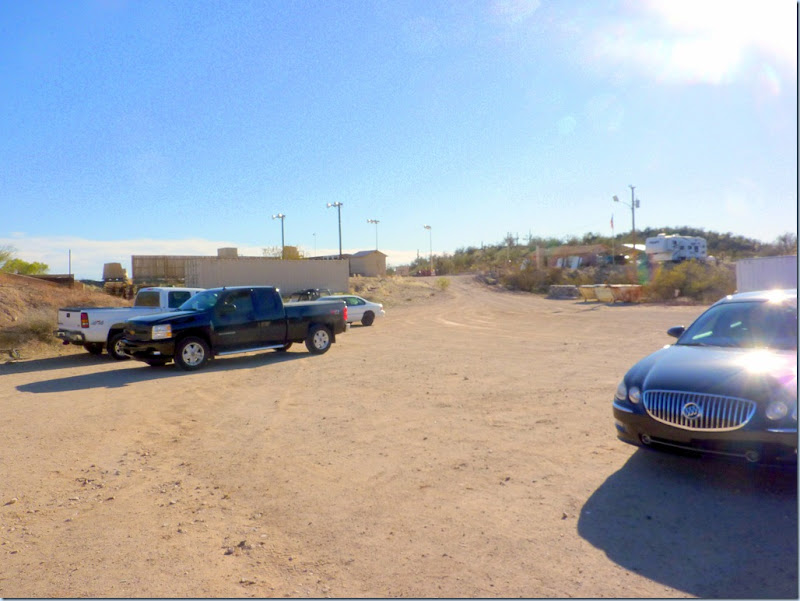 I was also impressed with their facility. It is a nice, large facility and growing by leaps and bounds.. They have just about everything to interest anyone, from Pistol to Rifle Bays, to a Shot Gun trap and skeet shooting area. 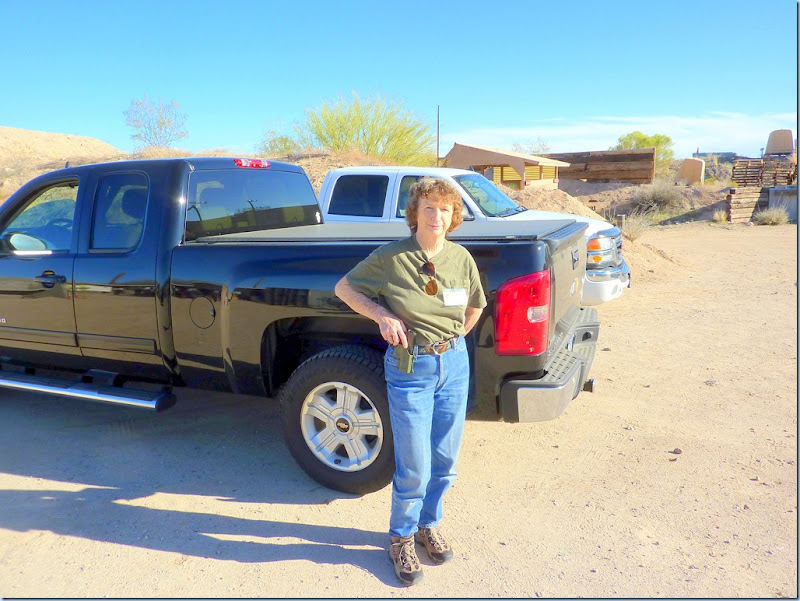 Ms. Pat went through all the orientation with the other ladies and was now ready to go to the Range. A lot of this training was “old hat” to her but as I said you can’t get too much training. The instructor and his wife were a very nice couple that were Rv’ers and used to live at North Ranch where we live. They still own property in our Park but a couple years ago bought a place in Congress just up the road. The instructors were Jerry and Caryl and we found out that they are good friends with our good friends  Mike and Janna. They used to attend a lot of SASS Cowboy Action Shoots together. In fact, we discovered that Caryl had even been over to our house last year while Mike and Janna were here….small world!!  Janna also quilted a "show quilt" for Caryl a few weeks ago and put a picture of it on her Blog. 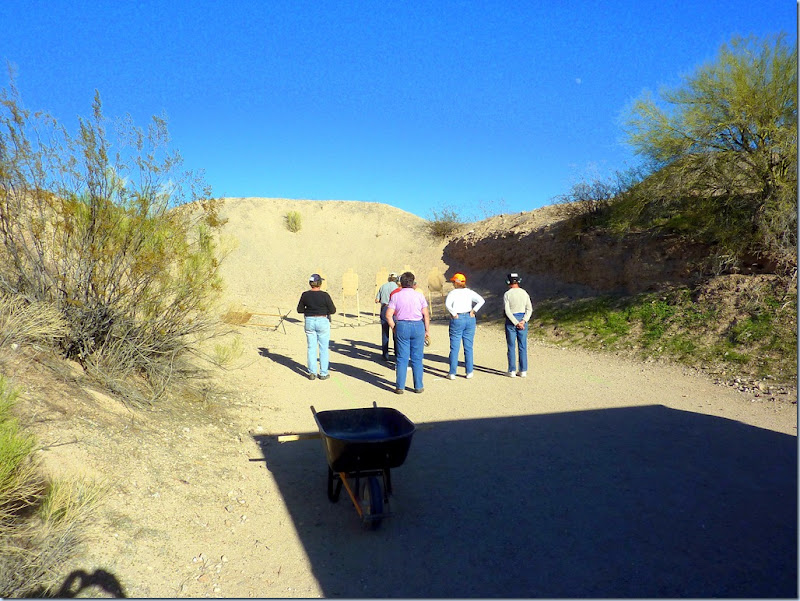 Soon the Gals were shooting. They had two groups and this is the other group that Caryl was instructing.

Jerry was Ms. Pats instructor and he kindly let me sit in and listen to everything.  Again, very basic and mostly safety items and Sportsmen Club rules and regs but it didn’t hurt me a bit to hear all this stuff that I have heard hundreds of times before.  As soon as Jerry got his group to the Bay, he asked if anyone would like to shoot first.  Ms. Pat volunteered immediately and jumped up. Jerry checked her gun and told her to load and go ahead and shoot.  She aimed and squeezed on the trigger....WHAM………I think he and the others gals were a little set back when she hit the little 2”circle bull's-eye DEAD center. First shot!! HaHa.....I was as proud as a new papa……that’s my Gal…. I have trained her well.   She placed two or three more shots right in the circle and even put one shot right through the bullet hole of the first shot……   This was with her Glock model 23.  Then Jerry asked the group, “anyone want to shoot my Revolver?”   Ms. Pat jumped up again right away and said I do!  Have I told you she is not bashful? She put all the shots in an area the size of a saucer..   Jerry, told her that was very good since she was not familiar with his gun.  He now knew that this gal was not a newbie.

I have to brag a little more and tell this story about her that happened way back in Florida at the Florida Law Enforcement Training Center near Quincy, FL.  She showed an interest in Pistol shooting one time when I was going out for one of my classification and qualification classes, so I asked the instructor if she could attend the course. He said "OK...if she pays the fee".  So she sat trough the 4 hours of classroom instructions and then we went to the Pistol Range.  We told the Instructor that she had never shot a Pistol before. Lots of Rifles, but never a Pistol.  The instructor was a little shocked but he ran her through the exercises just like he did everyone else.  Well, I’m here to tell you that at the end she had a higher score than the other four active duty Policemen had....plus she came close to beating me.  Wow, I and everyone else there was impressed.  I knew right then that she had that special knack that it required. So from then on I always took her shooting with me and helped her as much as I could…..  maybe too much, cause she now beats me!!  But down deep it makes me proud! 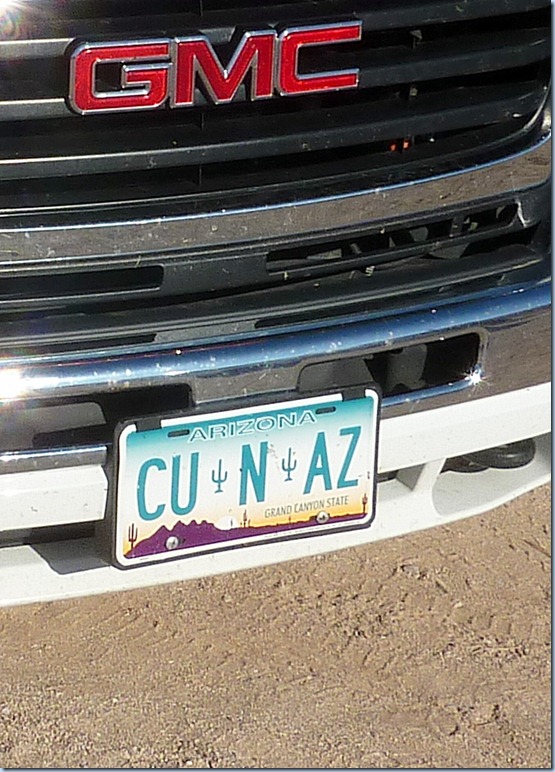 I got a kick out of Jerry’s front license plate… I would also like to compliment these fine folks for this work that they do here at the Sportsmen's club. All Volunteer !

Needless to say we are now Members of the Wickenburg Sportsman's Club and will no doubt be seeing more of the place, especially on Tuesday mornings!! I can be over in one of the other bay's by myself while Ms Pat is shooting with these gals. I really don't much care for organized shooting,,never have. I would much rather just go over by myself and shoot all alone. I think that's the reason I enjoy the desert out behind the house... Nice and quiet and all to myself.... that's my game.

Thank You all for stopping by……God Bless you all as we continue to thank our Father above for all He provides us..

This Blog is Published every Wednesday and Sunday..
Posted by Mike McFall at 8:54 AM

It is such a small world--Caryl and Jerry are some of the nicest people, very good shooters, when we were shooting Cowboy Action with them Jerry and Caryl frequently won their classes--I always had a hard time out shooting Caryl.

My wife is ex-Army, she was rated either expert or marksman, I can't remember but she is good! I am looking towards getting her a gun when we can afford to do so. I am going to go through the training as well but right now not interested in owning a gun, just learning how to properly use one.

So sad about the home invasions. There is also a news report about a Canadian getting shot and killed in a home invasion in Mexico. This was a fact of life in South Africa along with car jackings. Stay safe.

Man, having that club there is reason enough for us to start coming back to Congress!! Might have to buy a large lot there....not sure our renters will ever give up on our lot :)

My experience in teaching women to shoot is that they almost always outshoot men...Mike, I'll bet your experience is the same! I'm sure Pat can outshoot me!

Haven't been to the range much since I retired from the PD. I go a couple times a summer with my son & grandson, Donna used to love shooting while i was on the PD and got pretty good at it, I gave her her own Chief's special as a purse and self defense gun.I know Ms Pat is better but maybe if we visit I will bring the Glock 40 and a 9mm SD&W I have, and we cab plink a few.Be safe out there. Sam & Donna..

Sounds like you guys are ready for anything. Congrats to Pat for her steady hand and fine eye!!

It IS a small world and it seems to get smaller all the time.
I hate to hear of all the crime going on in Arizona and other places. What a shame.
I am so glad to see there are such fine places (and people) to train and learn how to handle and shoot guns safely.
You all take care!!

Sounds like a good outfit there. Although back up north of the Medicine Line there are some pretty rigourous hoops to go through to own a handgun, and as for carrying that is not done, I believe that wherever you might be you should have to have some training and maybe even pass a proficiency test before you are allowed to own or use firearms. Just tears me up when I read about some small child shooting his sibling or cousin with an improperly stored firearm.

It sounds like you guys have all that figured out though.

Don't mess with Pat, that's for sure! I've always enjoyed shooting and target practice, but not ready to own a gun....