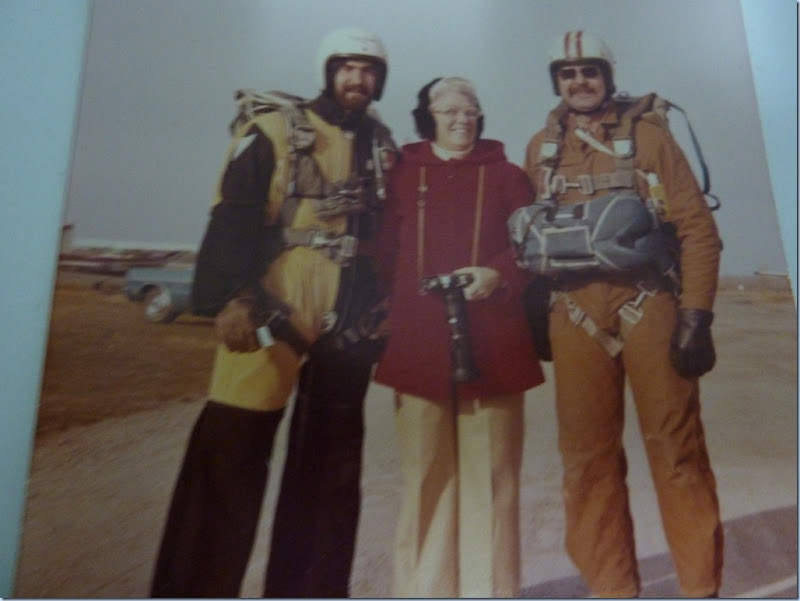 I mentioned in my last Blog that I used to Skydive.  I happened upon this picture that brought back some more good memories. This was the day of my “First” Skydive. Gregg was my jumpmaster instructor (on the left) and I don’t know who the lady is, just a photographer I guess. This was right before we climbed into the Airplane to go up and what I do remember is that it was cold as all "billy hell" that day. Temps were below freezing.  This had to have been back in the early 70’s and was at Lincoln, Nebraska.

It’s interesting to see the old skydiving equipment we were using. I had on what we called “Gutter Gear”. It's all old military gear and was called that because we carried our reserve parachute in front over our “gut”.  If you notice Gregg's gear is different than mine and the more modern type.  It had the reserve packed on the top of the main chute on your back, so he didn’t have that ugly “Gutter Gear” on his front side. I remember that I had gone through about 8-9 hours of training the day before and I wasn’t going to let a little cold weather stop my "First Jump", no way! All went well, even if I did land in a Lake……Glad it was frozen over, but it sure was HARD....and SLICK!!  Like my son “OP” always says, "If you live in that Cold Country, you have to be tough!!" He’s right! 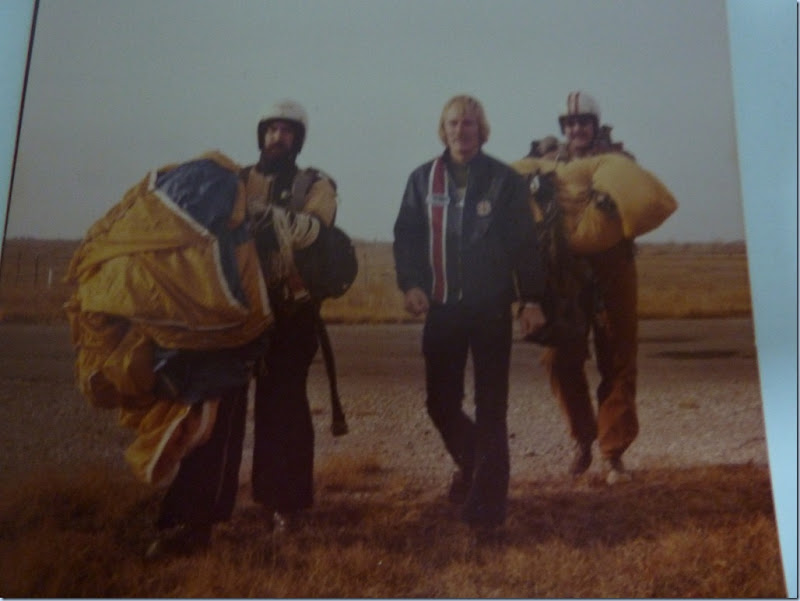 Here we are right after the jump with our chutes gathered in our arms walking back to the Airport. That was our pilot in the center. I was so excited I wasn’t even cold….until I got on the ground and took all the gear off.... then I headed for the fire!  I remember somebody saying it was –2 deg below zero up at jump altitude. The jump master has to be trained and licensed by the USPA....United States Parachute Association.  He is in full charge, helps you get into and out of the Airplane, then he jumps out after you.

Gregg was also my flight instructor and taught me how to fly an Airplane.  He helped me get my Private Pilot license. That’s really how I got interested in Skydiving. I always had to wait for him to make a jump or two before he would give me a flying lesson. One day he said to me “ Soon as I teach you how to fly, I’m going to teach you how to Skydive” and he did!  It ended up being an enjoyable sport for me and I had lots of fun doing it all over the country for many years.

As usual I got real interested in the equipment and went on to become a Licensed FFA Parachute Rigger.  Parachutist's can pack and jump their own main canopies but they must have a "licensed" Rigger pack their emergency reserve chutes. I could do that for them...for a fee of course! :-) Skydiving equipment was a popular item and there were changes coming fast and furious. It is totally different nowadays that it was way back then.

I've had lots of great experiences.  I've jumped into special events like Football games, Fall Festivals and even onto boats in the Gulf of Mexico. I remember we used to jump out at a high altitude way out over the Gulf and open our chutes high enough that we could make it in and land right on the beach. Some didn’t make it and landed in the water. We all had special water landing training, but I always made it onto land… I didn’t want to get salt water all over my Parachute!  We had fun! What memories! Oh, the stories I could tell ya! 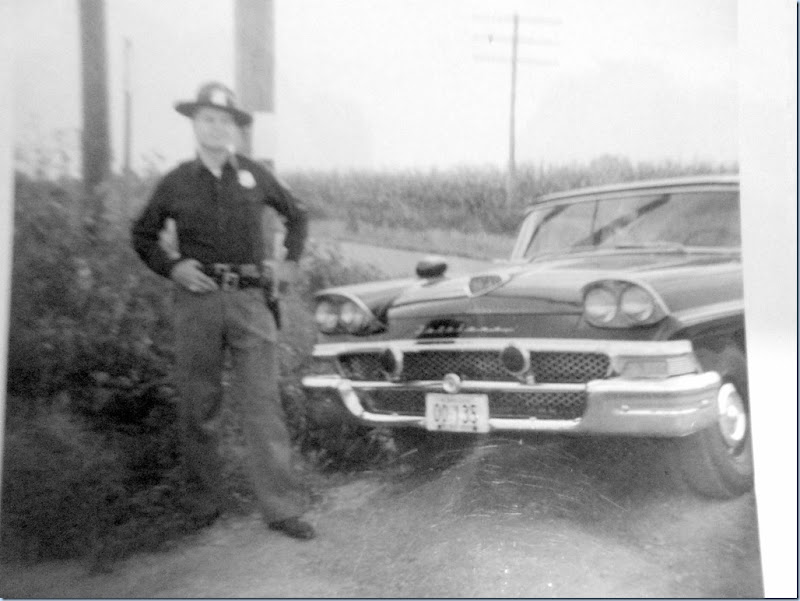 WOW!!  Here is another picture that I ran across that brings back a lot of memories. If you can tell me the year of my Patrol car, then you'll know the year this picture was taken. :-)  Can you tell me what year it was???

In my last Blog, I told you we flew into Hope.  I thought we were in Hope and I even "Hoped" we were in Hope. But my good friend and North Ranch neighbors, Ron and JerrieLea who used to live in the Hope area, told me were weren’t in Hope even if we "Hoped" we were!   But we were CLOSE.   Hope is 4 miles East of the KOFA Cafe.  We were at Vicksburg junction.  Thanks Folks.  Now maybe you (or someone) can tell me what the KOFA stands for? I asked the waitress and she told me, but I believe I forgot even before I got out of town! I do remember it was funny, whatever it was! CRS!

We had to go into the BIG city Thursday, way over to Scottsdale, some 77 miles from our house in North Ranch. That is where my Oncologist is and it is a long haul over there. The traffic in the Big City is just terrible. Drives me nuts.   Man o Man!  70-80 MPH, bumper to bumper and 4 lanes of solid traffic going both directions.  We are not used to that kind of traffic and thank God we don’t have to go very often. But one good item, I did get to stop at a gun shop and look at the Kimber pistol line. WOW, what beautiful little pistols.  Take a look at the Kimber Solo. Boy, is it nice!  Ken, the gun shop owner, told me they are so popular right now that he can’t keep them in stock. He did have one in his gun safe that was sold and he let me and Ms. Pat play with it for a while.  Expensive, but nice!

Our Followers have really grown lately and we especially want to welcome the following:

Thanks for being a follower and we hope you stop back often. Remember give us your comments when you can, as that is what makes this all worthwhile.  You can click on their pictures and go to their Blog if they have one.

We’re off headed to Church. You all be Safe and God Bless!

This Blog is Published every Sunday and Wednesday..
Posted by Mike McFall at 8:14 AM

I would NEVER skydive. I don't care if you would offer me a million dollars...NO WAY JOSE! Although you do look pretty good in all the equipment.
I am guessing 1954 on the patrol car..I am really guessing big time!

I Googled KOFA and the answer was: Kofa's post office was established June 5, 1900 and was discontinued August 27, 1928. Kofa, which stands for King of Arizona,(mining company
Hope that helps.
Betty

Is it a 1958 Ford Fairlane police special?

KofA is named for the old King of Arizona mine. Found that somewhere, don't remember where though. Little things like that stick in my head, just not the supporting facts!

I don't think I'd ever be brave enough to skydive, but that's amazing that you got to do that. Thanks for sharing the pics.....and thank you for the welcome!

Had to compete with that beautiful 1957 Chevy that the civilians had, before General Motors dropped it and made the ugliest car ever , the 1958 Chevy ! :)

First guess on that Ford Fairlane was 57 but after thinking about those headlights I'm guessing 58. 57 still had the single headlight I think. Although not a big interest in skydiving I was always interested in planes & flying. Just never had the money, the time or the smarts to earn me a Pilot's license. Good for you in being adventurness enough to do all those things when you did. I think that is the way to live life....just get out there and do it:))

I'll tell you what, Mike. That Kimber that Nick bought is one SWEET gun. The trigger pull on it is like 3 lbs....with no take-up. Wish I could afford one.

That's a 57 Ford Fairlaine 500 with the Intercepter 390 engine, Probably had a Dominator Siren box and a two channel Motorola Hi Band FM two way.
I remember my first patrol car a brand new 69 Plymouth Fury 1 with a 440 engine. back then you would get a new car every year. Be safe out there. Sam & Donna..

You are very brave to have jumped out of an airplane!! I would never, ever be able to do this. Enjoyed reading about your experience with it though. Reading about it is just my speed!! :)

wow on the skydiving..I can't even stand on a chair I'm so afraid of heights...so I can't even imagine jumping out of a plane...have a super week...

I always wondered why a sane person would jump out of a perfectly good airplane?

You are a wealth of stories Mike. Always enjoy reading them too!