My friend Paul mentioned Henry rifles the other day while we were talking and showed me his Henry.  This tweaked my interest and I started researching them.  I read and studied the history of the “Henry Repeating Arms Company” and low and behold, I found a book up at the Club House all about them. The Company is quite historic and interesting. Even in a technical world such as we have today, there is something about a “Henry” rifle that is an authentic link to our past. I couldn’t wait to put my hands on one.

It wasn’t long until I found myself in a gun shop in Prescott, with the famous Henry “Golden Boy” in my hands. WOW!!!  Just putting that baby up to my shoulder and sighting down the barrel took me back and made me feel just like a Texas Ranger must have felt when he took on a band of rustlers. The smooth action along with the octagon barrel and the gleaming brass finish really took my eye. I handed the rifle to Ms. Pat and told her to look down the barrel of it and see how it felt………. All she could say was my famous word…”WOW”!....Neat rifle!.

Now I could bore you with a lot of history on the Henry Rifles, but I won’t because I’m not a history teacher and if you're interested, you’ll do a little research on your own just like I did. If not, then you can speed on through this and get on with your interests. Only thing I will say is that the history of this gun began way back in 1850 when a promising young gunsmith named Benjamin Tyler Henry was hired by Oliver Winchester of the struggling New Haven Arms Company to improve on one of it's early designs for a repeating rifle.  During the next 10 years, the “Henry” was born!!  His "Solemn Oath" was and still is that “Henry Rifles will only be made in America or they won’t be made at all”!   Interesting stuff and it's all I can do to keep from going on and on, but you check it out.....  Henry Rifle Genuine History! 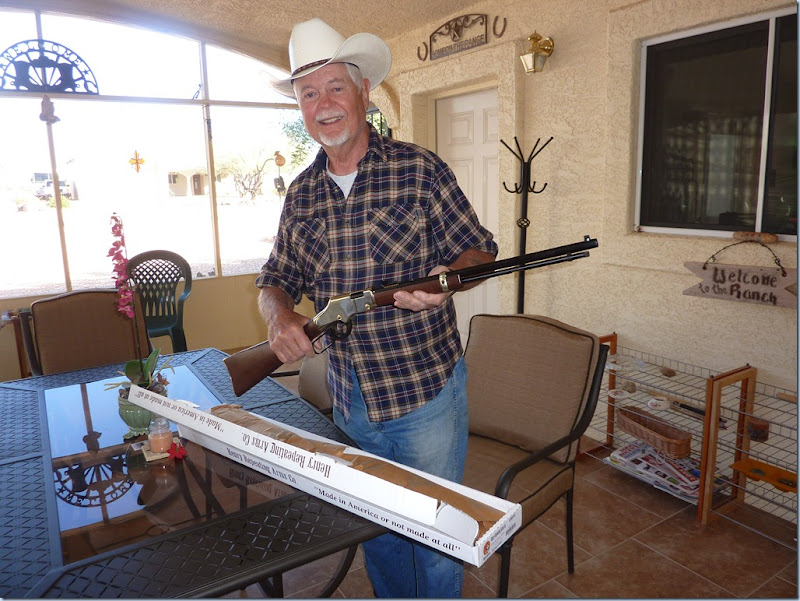 I started shopping and looking for a “Henry”. I decided on a brand new one and I finally came to an agreement with a dealer way back east in Ohio. I could hardly wait for it to arrive, but finally it did and here I am as I opened it. Ms. Pat grabbed the camera. As I told you, it can be Christmas at our house anytime of the year……Today it was Christmas for me!! 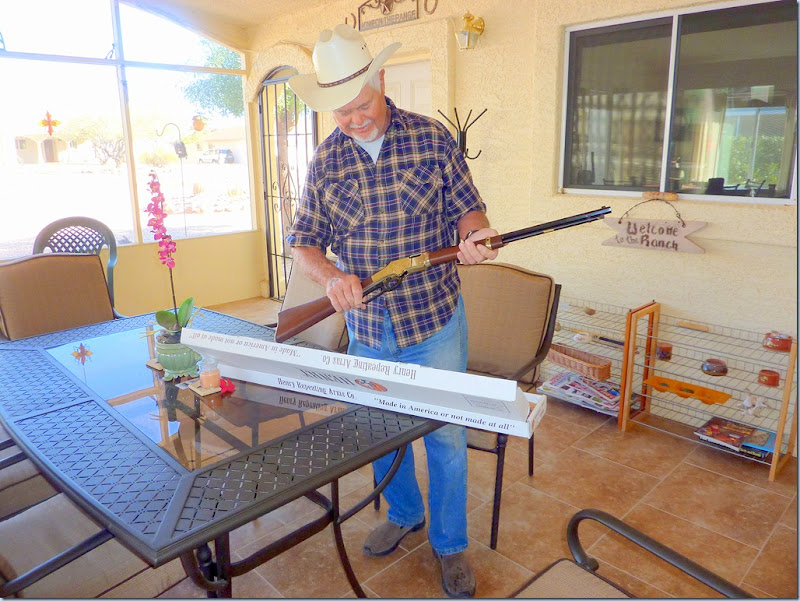 Now I have one of these “pieces of the legend” all of my own. I can sit back and admire it everyday, take hold of it and put it up to my shoulder and dream. A rifle that surely has a place of distinction in history. Yes, I do have a vivid imagination!

The Indians used to chase me a lot back on the ranch when I was a kid out riding windmills! (That’s checking windmills to make sure they were pumping water for the cattle) 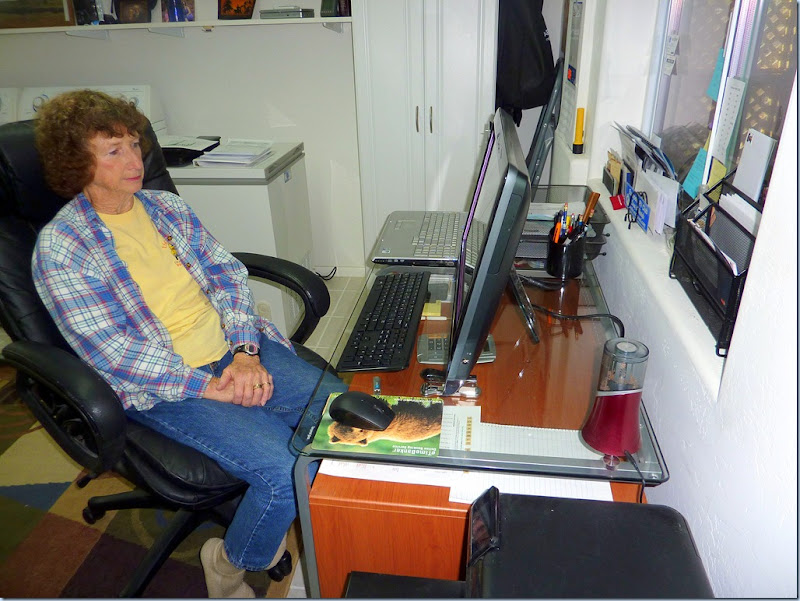 Well, Ms. Pat has been doing a little shopping herself! She wanted a new computer, and she picked a beauty. This new Dell consists of only a Monitor and a wireless Keyboard…  The CPU of this unit is totally contained in that BIG 23” Monitor with a “Touch Screen”! She has been busy setting it up all day. Here she sits back and admires “HER” new Christmas present. 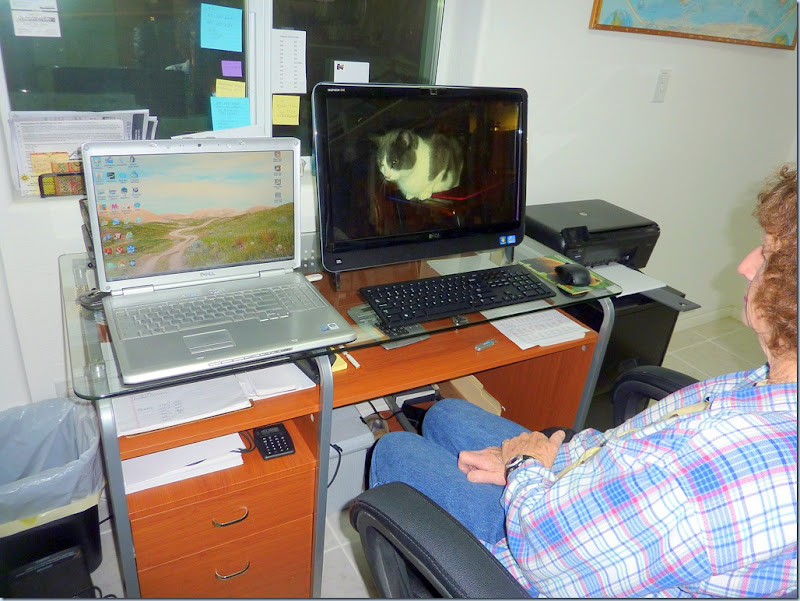 Look at the size of that screen compared to her lap top right next to it. We thought the lap top 17” screen was huge when we got it..  This new computer is amazing, when you walk up and sit down it has "Face Recognition" and “If” it recognizes you it will turn on.  It does all kinds of neat stuff.  If Ms. Pat takes a picture with her Droid, then walks close to this computer and presses a couple of buttons,  it will show the picture or video on the screen!!  Unreal!!  You can bet your bottom dollar that it will be OFF LIMITS for me!!  I’m afraid to go near it.... probably set off an alarm or something!!

As you can see, we are plenty busy around her, but it's not all fun and no work. This year looks as if it's going to be a bumper crop year… for weeds that is!!  Already the weeds are beginning to pop up through the rocks at both of our places here at North Ranch.  It's been a little warmer than usual, so the weeds are a little early. So the other day, we loaded up the sprayers and went up to our other lot and sprayed it down good.  WOW!  What a job.  Both of our backs were killing us as we drug ourselves home. Gosh, we are really becoming a couple wimps! Whoever said “a little work won’t hurt you”?  Whew, about killed us!! Now we haven’t even started on this big lot here at home.  But we’re having fun...right? For both of us, it's just a great pleasure to even be alive and one of the few pleasures that we continually thank our Heavenly Father for.   Praise the Lord!

Thanks for stopping by………Come back anytime, we’re pleased to have ya!

This Blog is Published every Sunday and Wednesday…
Posted by Mike McFall at 8:32 AM

Great pictures of the new Henry and the new Dell!! Glad you are continuing to have Christmas - in January!!!! :)

You look good holding that Henry!
Boy Ms. Pat, you can see that monitor a mile away. If you Skype with anyone, it will feel like they are right in the same room!

WoW! Good looking rifle..I have a friend that has one and he claims it's
the smoothest action of any of his rifles.He has 3 Winchester 94 among
his collection.One doesn't appear to have ever been fired.Congrats,nice
rifle.

Well....Merry Christmas all over again!! Love both the rifle and the new computer!! I am sure you guys will enjoy your new toys!! :-)

A fine looking Henry you have there, Are you going to take it out and shoot it,I have several WW2 pistols that are historic pieces now, but still shooters, imagine the stories an SS p-38 could tell if it could talk.Be safe out there. Sam & Donna..

Henry is mighty fine looking BUT wow Dell is awesome... Tha is some kinda computer!!! Have fun with both!
Donna

Have often thought that if I could have one rifle someday I would like one of those old Winchester looking rifles. Couldn't see the barrel on your Henry but from the what I could see I'm guessing it looks like a Winchester. Being Canadian, owning a gun at some point is unlikely. Too bad because I have always had a fascination with them. But then again, I have always had a fascination with airplanes and I'm not likely to ever have one of them either.

Nice to see a piece of American history is still being made. A very nice looking rifle enjoy. Lots of nice features on Ms. Pat's new computer, I'm sure she will enjoy them, I like the size of the monitor and the CPU being inside of it. Have a great week!

Nice rifle. Nice computer. Merry Christmas to both of you. :)